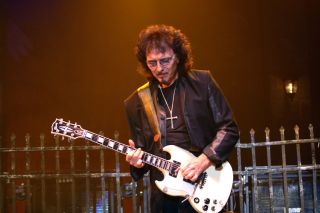 A long list of musicians, including Tony Iommi, have all chosen the Gibson SG as one of their instruments.

PRESS RELEASE: There is a seemingly ubiquitous appreciation today for nostalgic pop-culture references that hail from the '60s and now span into contemporary days, spattered with some of the most memorable faces, infinite historical moments, countless celebrated names and equally distinguished brands.

The '60s were a time of cultural, political and artistic revolution. In the course of the assassinations of John F. Kennedy and Martin Luther King Jr., the Vietnam War, Andy Warhol's iconic pop-art depiction of a Campbell's soup can and Apollo 11 landing on the moon, The '60s spawned the success of some of music's greatest acts from Elvis Presley, The Beatles, The Supremes, Bob Dylan, The Jimi Hendrix Experience, The Grateful Dead, The Beach Boys, The Rolling Stones, Pink Floyd, The Doors and Velvet Underground, just to name a few.

The decade also closed with arguably the world's most iconic and historical cultural gatherings, the Woodstock Music Festival. Amidst of all of this, Gibson Guitar did an image overhaul on one of its most widely appreciated guitars, the Gibson Les Paul Standard. The company created what is now known as the distinctly loved Gibson SG Standard - one of America's all time favorite guitars and an equally iconic and celebrated brand that was derived during this historically progressive era.

Today the SG Standard, much like the music hailing from the '60s, is still one of America's favourite musical instruments. A long list of legendary musicians, including Eric Clapton, Carlos Santana, Pete Townshend, Angus Young, Tony Iommi, Robby Krieger and Jimi Hendrix, have all chosen the Gibson SG as one of their most beloved instruments, and some of the greatest songs in rock music have been written, recorded and performed on a Gibson SG guitar, including "Evil Ways," "Soul Sacrifice," "Sunshine Of Your Love," "Crossroads," "I Can't Explain," "My Generation," "Highway To Hell," and "You Shook Me All Night Long," among many, many others.

With its streamlined mahogany body and sharply pointed offset double cutaways, the SG Standard remains a radical-looking instrument even today. One can only imagine the impression it made in 1961 when it rolled out of the factory, originally as the entirely revised Les Paul model. The new instrument was a bold design for Gibson, and it remains a bold performer almost 50 years later.

While the original Les Paul Standard is recognized today as one of the all-time classic solid body electrics, its sales were flagging in the late '50s, and in fact the instrument wouldn't be fully appreciated until a handful of British blues-rockers picked it up in the mid 1960s. In order to revive the Les Paul, Gibson undertook a radical departure from the original form; and the new SG landed with a major splash, selling almost 20,000 units in its first three years.

An artist with a trained ear and appreciation for the distinct differences and characteristics of different guitars can easily detect the perks an SG has to offer, setting it apart from any other guitar. While the SG possesses a lot of the Les Paul's warmth, it's also a bit explosive, with plenty of woody resonance and sustain. Many players also value the SG's slim body and reduced weight.

Having become such an iconic rock and roll tool, embraced with gusto by the heavy rock and metal fraternities in particular, it's amazing to think that the SG was designed mainly for the same guitarists that Gibson was trying to court with the original Les Paul - namely jazz, pop, dance-band and even country players. With its smooth, easy playability and surprising versatility, it fit the bill perfectly for a wide range of demands. But this guitar was born to rock, and rock it did.

A major departure and a landslide of a hit, the SG Standard has remained in production continually since its release in 1961. It continues to find new generations of fans almost 50 years later courtesy of the manufacturer, Gibson USA. This staying power is a true testament to the iconic-American class of this guitar and contemporary music. Such popular new artists who continue to play and tour with the Gibson SG include Jonas Brother's Nick Jonas, System of Down's Daron Malakian, the Stereophonics, Devon Allman, and Derek Trucks, to name a few. A further tribute to the instrument is obvious in the history of the music played by such greats as Pete Townshend, Lenny Kravitz, Paul Weller, Keith Richards, Lynryd Skynryd's Gary Rossington and the Car's Elliot Easton.

An avid music fan cannot forget the value of the Gibson SG guitar most exemplified in the story of the 1964 SG Standard used by Eric Clapton while with the band Cream. The guitar known as the "Fool" was painted by the Dutch artists collectively known as The Fool. In 1968 the guitar was loaned to Jackie Lomax, a companion of George Harrison, and later sold to Todd Rundgren for $500. It was eventually sold at auction to a private collector for approximately $500,000, marking an astronomical increase in value in less than 40 years.

Gibson Guitar is celebrating the historical significance and increased popularity of the Gibson SG model by launching the "I Love My SG" campaign around the globe with an array of special events, artist interviews and prominent media opportunities.

For more information on the Gibson "I Love My SG" campaign and on Gibson Guitar, please visit www.gibson.com