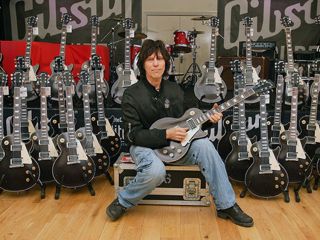 WHAT: Beck will pay tribute to his mentor and friend, the late guitar great Les Paul, with an intimate show consisting of Les Paul's memorable classics along with some rockabilly favorites. Celebrating what would have been Les Paul's 95th birthday, Beck will be joined on stage by Irish rockabilly sensation The Imelda May Band. Les Paul, known worldwide for his legendary performances and his incomparable innovations that shaped the evolution of music, remained a fixture in the New York music scene, drawing in crowds with regular gigs at The Iridium Jazz Club until the age of 94. Jeff Beck's appearances will mark the official dedication of the performance space at the club to the late Les Paul.

Jeff Beck's first studio album in seven years, Emotion & Commotion, is available now on Atco Records, an imprint of Rhino Entertainment. The album is a mix of tracks that find the guitar virtuoso accompanied by a handpicked cast of talented musicians, including guest vocalists Joss Stone and Imelda May, as well as several songs accompanied by a 64-piece orchestra. Emotion & Commotion achieved the highest debut of Beck's 45-year career as well as his best single sales week of the Soundscan Era.

Performing This Week…Live at Ronnie Scott's, Jeff Beck's platinum-certified live DVD, was released March 2009 via Eagle Rock Entertainment. The concert, which hit number one on the music DVD Soundscan charts and received massive critical acclaim, was filmed over the course of several nights at the famed Ronnie Scott's Jazz Club in 2007. The companion CD received a Grammy this year for Best Rock Instrumental Performance for Beck's interpretation of The Beatles' A Day in the Life.

About Les Paul Mondays at the Iridium Jazz Club:

For close to 13 years, The Iridium was home to Les Paul and his Trio. Nearly a year after his passing, the Father of the Electric Guitar continues to shine on with Les Paul Mondays, an ongoing concert series dedicated to memorializing his lasting legacy at The Iridium. Beck has chosen to play these very special concerts here for this reason.