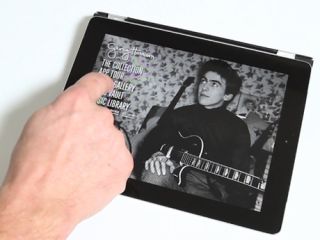 Want to drool over George's Harrison's most famous guitars? His Gretsch Duo Jet? His Fender "Rocky" Stratocaster? What about his Rickenbacker 360/12, his Fender rosewood Telecaster and many others? If the answer is yes, you'll be able to soon, because as the saying goes, "There's an app for that."

Called The Guitar Collection: George Harrison, the iPad app, produced by the George Harrison estate and Bandwdth Publishing, offers 360-degree pictures of the guitars the ex-Beatle played on iconic Fab Four recordings, live shows, and in his solo work.

According to a press release, fans will be able to explore "the scratches, dings and worn threads as if they themselves were holding the instruments."

The history of each guitar is laid out in great detail, including the origin of the instrument, when and how it became part of Harrison's collection, modifications, and why each was so important in creating his distinctive sound. Through audio, this virtual showroom will also catalogue how each guitar was used on specific tracks.

The video app contains footage of artists such as Ben Harper, Josh Homme, Mike Campbell and Harrison's son, Dhani Harrison, each playing and showcasing the guitars and exploring their feel and tone. In addition, TV personality and guitar aficionado Conan O'Brien sits down with Dhani to discuss what make these guitars so exceptional.

The app is priced at $9.99 USD and will be available at the Apple App Store on 23 February. You can preview the app right here.