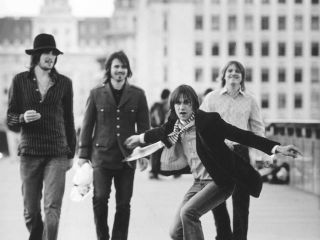 Kasabian offer a free download of their new track Vlad The Impaler from tomorrow (31 March 2009).

Fans can download the track for a limited period of four days from 19:30 (GMT) from Kasabian's official website.

It's the first taste from the band's third album. The album, West Rider Pauper Lunatic Asylum, has been produced by Dan The Automator (Gorillaz, Handsome Boy Modelling School) and is released on 8 June.

A 'proper'single, Fire, is released 1 June.

According to The Sun newspaper, US stars Jay-Z and Kanye West are now both keen to work with Kasabian.

"Kasabian's publishing deal is coming up soon and Jay-Z has heard their music and loved it," a source told The Sun newspaper.

"It's rock 'n' roll that appeals to different music fans. The new stuff could fill any dance floor.

"Kanye loves British music and was bowled over by the last Kasabian album. It could open the door to the US for the band."

Hmm. All words from The Sun's ubiquitous 'source', but who knows? Maybe Kasabian have it in them to meld rock and rap on a bigger level?