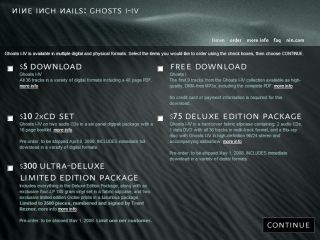 Following varied reports of the success of Radiohead´s In Rainbows online release, Nine Inch Nails have announced a variety of ways to purchase their new album Ghosts I-IV, including a free download.

Various packages are available, with the über-fan invited to pay $300 for a limited edition package including all 36 tracks on two audio CDs, a data DVD containing full multi-tracks, a Blu-ray disc and vinyl set signed by Trent Reznor himself.

The more casual fans amongst you can download the first nine songs in the set for free here.

Reznor´s last attempt to get listeners to pay a ‘fair´ price didn´t go as well as he had hoped, and in this interview he talks frankly about the role of the web in music distribution: "I choose the battles I can fight. In my mind, I think if there was an ISP tax of some sort, we can say to the consumer, 'All music is now available and able to be downloaded and put in your car and put in your iPod and put up your ass if you want, and it's $5 on your cable bill or ISP bill'."

Is this business model the future for established artists? If so, where does that leave new bands who have yet to build the kind of fanbase required to make a pay-what-you-like or free download release profitable? Let MusicRadar know what you think…