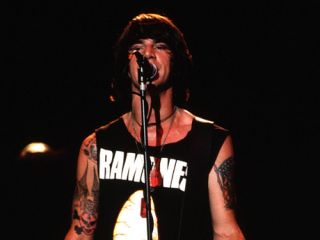 CJ Ramone (pictured in 1990) is a punk rocker...and was almost a metal rocker! © Neal Preston/CORBIS

Bassist CJ Ramone has had some luck: Not only did he get to join one of his favorite bands, the Ramones, but he was asked to become a member of Metallica - twice!

Our friends at Guitar World caught this recent interview Ramone (whose real name is Christopher Joseph Ward) did with The Great Southern Brainfart. While talking about his current tour and offering his thoughts on the Rock And Roll Hall Of Fame, Ramone discussed joining one legendary group...and almost becoming a part of another.

According to CJ, he was in military jail when he received a call from Johnny Ramone. "It was pretty interesting," he said. "Just to have Johnny Ramone calling you while you're in jail alone was surreal, to say the least.

"The only way I can really describe it is, imagine if you got that phone call and were told that you got the gig. That's what I always try to get across to everybody. It was nothing I could ever dream of happening in my life."

As for Metallica, Ramone said that he was courted by the band after the departure of bassist Jason Newsted. "I was approached about joining Metallica not once but twice [laughs]. When Jason first left the band, they approached me. A while had gone by and they were having a hard time finding someone, so they approached me again. At the time, my son had been diagnosed with autism, and there was just no way I could leave him. Johnny [Ramone] was actually the one who hooked me up with the audition because he was friends with Kirk Hammett.

"I talked to my son's doctor and explained the opportunity and that I could bring my family out on the road and even hire a nurse. The doctor just told me that my son needed to wake up in the same place every day, he needs to have meals at the same time every day and he needs to go to school every day and be around other kids. He said that anything other than that could be a detriment. I was honored that they asked me, but there was just no way I could do it.

"The beautiful part about it all is that now my son is in regular classes at school. He's on the high honor roll, and he's even starting his own band now with a couple of friends of his. The change in him from when he was a kid is amazing. I'm not taking credit for it all. There were a lot of people who helped him along the way.

"If I had not been here, I don't know that the outcome would have been as good, and that totally justifies my decision. I have no regrets. It would've been great to play with Metallica after being in the Ramones. Jesus, that would be just like a too-perfect life." [laughs]

You can read the entire interview with CJ Ramone here.