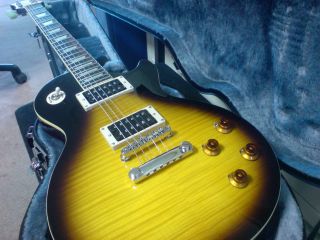 The Epiphone Slash Les Paul in its smart hard case

While you´ll have to wait until 1 April to get to grips with the new models in stores, the Epiphone version arrived at MusicRadar HQ today and we couldn´t resist giving you a sneak preview.

As you can see from the picture, this is a seriously classy Epiphone with an abundance of high-end features such as Seymour Duncan Alnico Pro II humbuckers, a vintage-style long neck tenon and a new LockTone bridge that is secure even without strings attached.

So, let´s cut to the chase and hear this Dark Tobacco Burst bad boy in action.

Here´s the same rhythm part with some lazy lead playing on top of it. We used the same amp model, with a little extra gain and ambience:

The Epiphone is set to retail at $1464 stateside, with the UK RRP currently TBC. Check out Gibson´s dedicated site, which has information on all of the forthcoming Slash signature instruments.

For an in-depth review, be sure to check out Guitarist Magazine's May issue, on sale 10 April.