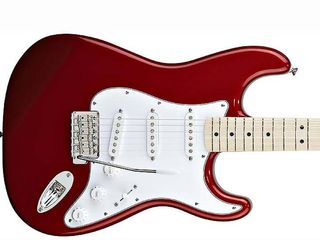 Fender have lost their court case

Guitar makers Fender have lost an application to make its Stratocaster, Telecaster and Precision guitar body shapes a trademark in the USA.

Similar applications have previously been rejected, both in the UK and the rest of Europe.

But the Trademark Trial and Appeal Board of the United States Patent and Trademark Office said:

"Fender refers to the 'iconic' status of these [instrument] outlines in American popular culture. However, we must resolve a narrow issue: Do consumers associate these two-dimensional outlines, depicted in the drawings, as indicators of source?"

The litigation has lasted five years and included over 20,000 pages of evidence demonstrating countless companies who have sold guitars that use the body shapes that Fender sought to trademark.

"The applicant has not established acquired distinctiveness such that these two-dimensional outlines of guitar bodies, standing alone, serve to indicate source," the TTAB concluded. "The evidence overwhelmingly demonstrates that these configurations are so common in the industry that they cannot identify source.

"In fact, in the case of the [Stratocaster] body outline, this configuration is so common that it is depicted as a generic electric guitar in a dictionary."

This is a Fender

This is not a Fender

Hmm. Some at Fender might well argue the outline is only 'generic' because it has been copied for so many years?

The entire decision can be read here.

Liked this? Now read this: 12 best amps for heavy metal and 10 best acoustic guitars under £300