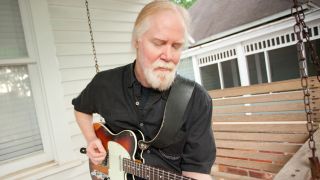 Taking a break from his day job as lead guitarist for the massively popular jam band Widespread Panic, Jimmy Herring (who is also one of the founding members of The Aquarium Rescue Unit, Project Z and Jazz is Dead) recently released a most fine solo album, Subject To Change Without Notice.

Starting on 1 November, Herring will hit the road with bass legend Victor Wooten for a co-headline tour throughout the US. Before the run, we caught up with Herring to ask him for his responses to a little thing we like to call Famous Firsts.

"There were two: The Allman Brothers At Fillmore East and Jimi Hendrix Smash Hits."

"That's hard to remember, but I worked on Hey Joe by Jimi Hendrix for a long time. I also spent years learning Jimmy Page's Heartbreaker solo. I'm not sure if I really ever played it correctly, but it was close!"

"A band called Silver Age in the eighth grade. We played Rush, Kiss, Boston and other covers. It was a blast, and the guys in the band were really good players."

"That still hasn't happened… and it probably never will!"

Herring in the studio, playing what we're guessing isn't the solo to Heartbreaker.

What was the first guitar you got that made you feel as though you found "your sound"?

"That would be a '69 Stratocaster. But I still hadn't found my sound until I got the courage to route out the body and put humbucking pickups in it."

"The talent show in the eighth grade. It was in the school auditorium, and the entire student body was there. We played Helter Skelter and Walk the Dog. All the kids stood up and screamed, and all the teachers got up and walked out. I remember seeing all of the older people with their hands over their ears as they ran out the door. I got a huge shot of adrenalin from that. Only problem was, we didn't win the talent show."

"Steve Morse. My friends and I snuck in the club during a soundcheck Steve was doing, and he walked right up to us. I was frozen with fear and totally starstruck. But he was super cool and talked to us for about 10 minutes."

"A brand-new Marshall head. I didn't like the sound, though. That's when I discovered I should have bought an older one."