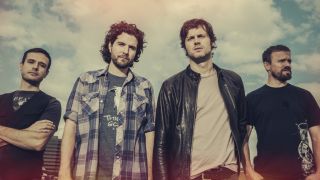 Since issuing their self-titled debut album in 2008, gutsy Austin alt-rockers Nelo have steadily built a loyal following the old-fashioned way: night after night, gig by gig.

Before heading out on a late winter/spring tour, Ragland sat down with MusicRadar for a little something we like to call Famous Firsts.

"It was an Alvarez dreadnought cutaway. I was 16 years old. One night I saw someone I knew showing off his new guitar. He had bought a new Taylor earlier that day and set his old Alvarez aside. He was playing a song that I listened to a lot at the time. I was blown away, but I distinctly remember thinking very quietly "Wait a minute… I can do that." I bought his old Alvarez guitar from him the next day for a few hundred dollars."

"Dave Matthews Band's Before These Crowded Streets. I was hanging out by myself in my best friend's room and this album happened to come on the stereo. It completely blew my mind. The songs, the voice, the music - the melodies just danced in and out of each other. It was all one thing. When it ended, I started it over and listened to the whole thing again.

"It's funny actually, kind of like my first guitar - I bought Before These Crowded Streets and all the previous Dave Matthews Band albums from my friend the very next day. I paid him in quarters, nickels and dimes just to piss him off - not sure why I did that in retrospect. It was the greatest gift I'd ever been given. Everything changed for me after that day."

"I'm not a soloist. I only ever wanted to teach myself guitar so that I could write songs. To this day I've never attempted to take a guitar solo. I still only want to write."

"My first nice guitar was a Martin 000-C1E. I ordered it from Martin through Guitar Center. I remember calling every single day to see if it had arrived until it finally did. Now I have a Martin HD-16r Adirondack that I love, and I play every night. I'm on the market for a new amp. I have a '69 Deluxe Reverb that I like a lot too, but I'm afraid to take it on the road."

"Nelo. I hope I never play in another."

"I don't know if anything I do is great. I just know it feels really good to do it. My favorite song is always the one I just finished. I just love writing so much. I love the process. I love creating something from nothing. I get a thrill from filling up a blank sheet of paper. And I know when I've written something true - there's a feeling that I get every time. I don't know if it's any good, though. I know it's good for me. But it's not for me to decide if it's good for someone else. I hope it is."

What was the first guitar you got that made you feel as though you found "your sound"?

What was the first big audience that you played to? How was the experience?

"Georgia Theatre in Athens, Georgia. It was not unlike playing to a big audience now. I've always had a little performance anxiety. I was a wrestler in high school, and I remember the same feeling before our wrestling duals. Sometimes it's good, sometimes it's bad. You feel the lights, you feel the eyes on you… most of all, you feel the desire to right by yourself. You just buckle down and push yourself through it. I've realized that the reason why I get nervous is because I know I have something inside me that is worth getting out. And I just want to do justice to it. I guess I'm confident in the message but not quite as confident in the messenger. This is like therapy."

"This interview has come full circle - Dave Matthews. And it was long before I started writing songs and dreaming of starting a band. As a kid, around the time I first picked up the guitar, I woke up in a hotel one morning to hear that Dave Matthews was staying in the very same hotel. I waited in the lobby for him for an hour or so until he finally emerged. I followed him on foot for blocks to a nearby coffee shop - yes, very creepy fan.

"I worked up the courage to say something to him while he was sitting with a friend. He was so nice to me. He realized that I had followed him from the hotel. I think it probably put him off a bit, but he was still so decent to me. When I meet Nelo fans now, I always remember that incident, no matter what. As Dave was leaving, I walked up to a busker who had been playing guitar with his back to us. I called out to him, "Hey, hey! You won't believe this, but Dave Matthews is right behind you walking away! He's right there!" The man looked up at me - he semed to believe me, but he was very unimpressed - and without even turning around to see if my story was true, he said, 'Oh, yeah? Tell him to bring me a dollar.'"

"Still waiting on that check. [Laughs] I bought my Martin - and I've played it every show since."