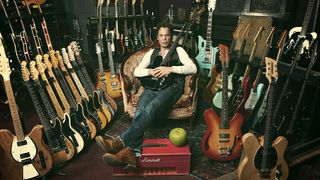 It's been a while since we heard from the band Big Wreck. A really long time. Their last album, The Pleasure And The Greed, was released back in 2001. Following that record, the group disbanded, and guitarist-singer Ian Thornley went on to form his own group, Thornley, while playing sessions for fellow Canadians Nickelback and Sarah Harmer, among other.

Last year, Thornley hooked up with his ex-Big Wreck mate Brian Doherty to resurrect the group, and the result of their collaboration, Albatross (executive produced by Nick Raskulinecz) will be issued on 19 February (it was released on 6 March in Canada).

We caught up with Thornley recently to ask him a series of questions, a little something that we like to call Famous Firsts.

"It was a cheap acoustic, which I got for my 16th birthday. It sat in my closet for about a year."

"Hmmm.... Circles In The Stream by Bruce Cockburn. Fingerstyle acoustic... one of the best - some stellar playing. It's a live album. Seeing as I started on an acoustic, it was something I naturally gravitated toward."

"It would have to be Stairway To Heaven or Hotel California. How long did it take me to learn to play it correctly? Well, nuance is everything, everyone's hands are different, and interpretation is always a personal experience. I honestly don't remember how long it took to play it correctly - in my own eyes at least."

"The first really good guitar was a beat-up '65 Strat. I found it in Rhode Island. Amplifier... the first really good amp, I think, was a Fender Super Reverb, but I didn't have it for very long. It was the 4 x 10; the problem with the Super was that someone had taken the four 10-inch speakers out and replaced them with a single 18-inch speaker. It was a blackface."

"My first band was called Tula. They were all adults, and I was 13. I was the keyboard player. That was my first experience playing gigs."

"You think they're all great when you first write them. You don't set out writing a song to be less than great. Time and perspective can change that, however - something I think is great other folks might not agree with. I'm still trying to get better with every song I write."

What was the first guitar you played that made you feel as though you found "your sound"?

"Without question the Mouradian Flapjack, which Jon Mouradian and I designed on a napkin. It's all of the things I ever wanted in a guitar - in one guitar."

"At some point in the late '90s, I guess. It was nice. We had worked our way up over the course of several years, and it felt like we were doing the same thing as always, only louder, and with more space to move around in. I'm not entirely certain which date or place it was, as it was such a gradual thing."

"Well, I guess it was Bruce Cockburn and Eric Johnson. I got to hang out with each of them on a few occasions and pick their brains, talk guitars and such."

"I'm still waiting for that one."