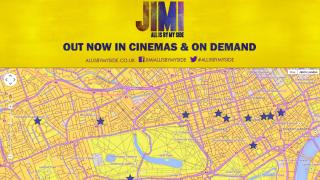 Thanks to a new interactive map, you can now trace some of Jimi Hendrix's most famous London haunts online.

The map - produced by the makers of the biopic Jimi: All Is By My Side - gives information on places of Hendrix interest including his first London home in Hyde Park Towers, The Marquee Club and many more.

Jimi: All Is By My Side starring Andre Benjamin (Outkast's Andre 3000) and directed by John Ridley (12 Years A Slave), charts a year of Hendrix's life; 1966-67 and covers Jimi's progression from a New York-based sideman to his arrival on the London scene and triumphant Monterey appearance.
It is available to stream on demand here.