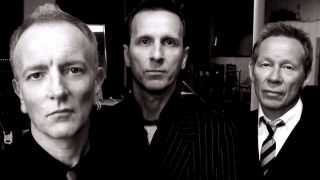 The members of Manraze can be forgiven for not rushing new music out: Since the release of their second album, 2011's punkfunkrootsrock, former Sex Pistols drummer Paul Cook has been busy recording and touring with Edwyn Collins, onetime Girl bassist Simon Laffy has written not one but two novels, and as for guitarist Phil Collen, well, he has this little day job in a band called Def Leppard.

On November 12th, the trio release I Surrender, a three-song EP featuring a brand-new recording of All I Wanna Do, the original of which appeared on punkfunkrootsrock; Connected-Live From Shepherd's Bush, a straight-up live performance from a studio podcast session; and the shimmering, broadly melodic title track that features background vocals by Debbi Blackwell-Cook.

Def Leppard fans won't have to rack their brains identifying the axeman behind I Surrender's lush guitar textures and vibrant solo, but they might be surprised to learn that Collen tracked all of his performances for the long-gestating song on a laptop while sitting at his kitchen table. "I plugged straight into my Mac via Guitar Rig 5," he explains. "I played along to Paul's eight-year-old drum track. Then I plugged my Yeti Blue microphone into the laptop and sang my vocals. I sent the track to Simon, and he played basslines on top of everything. There was no studio involved, and I got the sound that I wanted. I love the way it sounds. I think it's probably the best sounding song we've got."