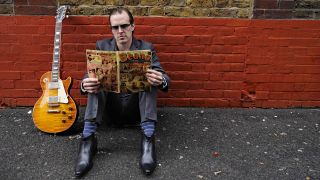 Bonamassa replicating the iconic 'Beano' cover with his own 'Burst back in 2011 (Image credit: Jesse Wild/Future)

New light has potentially been shed on the fate of Eric Clapton's 'Beano' Les Paul Sunburst, which was famously stolen after the guitarist used it to record the legendary Blues Breakers With Eric Clapton album in 1966. The claim was made by blues-rock's man of the hour Joe Bonamassa during a backstage interview with Guitarist magazine last night as Bonamassa brought his sellout British Blues Explosion tour to Bristol's Colston Hall.

"It's a '59, not a '60, it's got double-white [humbucker] in the front and it's got a double-black [in the bridge]," said Joe of the guitar he believes is the one formerly used by Clapton, challenging the widespread belief it was a 1960 'Burst.

"It has a pretty plain top and it is in a collection on the East Coast of America. That's all I can tell you - and that's all I will say. It still exists and I haven't seen it, but I have it on good authority from people who have. And it's got the little 'fingerprint' by the pots and they can trace it back," he alleges.

The claim is a tantalising one, as Clapton's 'Beano 'Burst' Les Paul, used to record breakthrough tracks such as his explosive cover of Freddie King's Hide Away, is widely regarded as the Holy Grail of historic electric guitars.

Numerous theories have been put forward over the years regarding the guitar's final fate, following its theft from Clapton at a Cream rehearsal in late 1966. But so far no-one has come forward with a guitar to be authenticated - and perhaps, despite this fresh claim, it will remain that way.

"I don't know if Clapton would even want it back at this point," Bonamassa, who is a prolific collector of vintage guitars himself, continued.

"Truth be told, would he even recognise it 50 years on? I guess so. Maybe it'd be different if he'd scratched his name on the back of the headstock or had recorded the serial number. But then Jimmy Page has got back his Custom three-pickup that he played in the Albert Hall in 1969."

To read the full interview, pick up a copy of issue 412 of Guitarist magazine, on sale 16 September.

Joe Bonamassa continues his critically acclaimed British Blues Explosion tour, in which he pays tribute to the seminal guitar work of Eric Clapton, Jimmy Page and Jeff Beck, at Greenwich London Music Time Festival (Thursday 7 July) and Newark Castle, Nottinghamshire (Friday 8 July) in the UK, after which it moves on to mainland Europe. For info, see Joe Bonamassa's website.