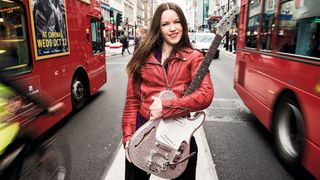 She's the Finnish queen of blues slide who numbers TV's Hairy Bikers among her fanbase - but what will happen when we cook up the 10 questions we ask everyone?

"It was an Aria Pro II. It had a pretty fat neck and a fat tone, too. My father said to me one day, 'Okay, Erja, let's go to the music store and buy you a guitar…' so we went and bought the Aria. I was very keen on playing electric guitar from the beginning - I was a teenager and I wanted to rock!"

Supposing the building was burning down, what one guitar would you save?

"My G&L semi-hollow Z-3, it's my slide guitar. I've done almost every single gig that I've played abroad with that guitar. So it's very dear to me and it's very cool-looking, too. If I could grab something else as I would grab my Gibson Chet Atkins."

"It's a Supro from 1952. It's a very small, beautiful little piece I bought from Sweden when I was touring there and it's a very lovely looking little guitar. I don't tour with it because it feels a bit fragile, although I'm pretty sure it's seen a lot of life."

"I use Dunlop Jazz IIIs for playing standard guitar and when I play slide guitar, I like using fingerpicks. So I have a thumbpick and a pick for my middle finger for Travis-picking style, and for the slide as well."

When was the last time you practised and what was it?

"I was practising for the Hairy Bikers for the BBC. They asked me and my band to play one of their shows, so I was practising some of the songs they were asking us to do. I can't reveal what they were yet, you might have to watch the show."

"I'm not a big fan of changing guitar strings. But there comes a day when they just start to sound bad, you have to change them. When you play slide guitar it doesn't matter that much, but when you play standard guitar and they sound out of tune that's not cool!"

What song would you play on an acoustic around a camp fire?

"When I started playing guitar I was playing a lot of covers and I really liked playing Knockin' On Heaven's Door; it's easy, everybody can do it. You can do it if you're a bit tipsy as well! The other is Hotel California by the Eagles. Both songs have a very catchy chorus, so if there's people around they can sing along, so it's not a one‑girl show."

"I don't think I could ever leave music; it has always been the essence of my life. My father plays guitar, my mother plays bass and they both sing, so I was raised in a very musical family and, for me, doing music is so natural. I'm really happy right now - I'm living the dream, in a way."

"Play more with others, listen to more blues guitarists and try to play what they are playing. I was studying in school and they were always giving me lead sheets to play from - transcriptions and things like that - but I feel I should have gone out more and played more.

"I was born and raised in a small town and the music scene wasn't big, so it was hard to have jams. When I was playing in a band I didn't play loud, I was too shy. So I would say to that girl, 'Come on, do it; turn it up, have fun!'"