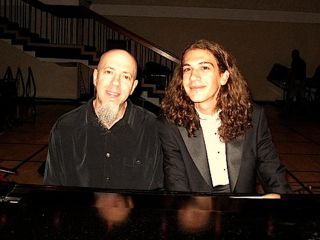 When Dream Theater keyboard master Jordan Rudess performs his orchestral piece, Explorations, on Sunday (23 January) at the Tarrytown Music Hall in Tarrytown, New York, it will not only mark the first time a US audience has heard the composition live, it will also see Rudess joined on stage by an 18-year-old musical prodigy from Turkey. And it's all thanks to YouTube.

"As you can imagine, I get inundated with video clips and people telling me, 'You've got to check this out, you've got to check that out,'" says Rudess. "I try to watch as much as I can - and thank goodness Dream Theater has such a loyal audience around the world, people doing all kinds of wonderful tributes and versions of our music - but I can't look at everything. It's physically impossible. But people kept telling me about this guy from Turkey named Eren Basbug and all of his incredible clips on YouTube. After a while, I thought, Well, there must be something there. A) there was, and B) he was only 18 or something. I couldn't believe it!"

What Rudess saw blew his mind. (Check out one of the videos, above.) Basbug, a classically trained musician who also loves progressive rock, had orchestrated and conducted an entire reading of Dream Theater's 2002 album, Six Degrees Of Inner Turbulence. "I've seen a lot of treatments and interpretations of our music," says Rudess, "but what Eren did was absolutely extraordinary. I knew I had to reach out to him."

Which was absolutely part of the plan, according to Basbug. "I was trying to make a statement and pay tribute to some of the music that I love," he says. "But yes, I hoping that, in some way, I might get the attention of Dream Theater. But I knew it wouldn't happen if I didn't create something really good and wonderful. The concert that I conducted of Six Degrees Of Inner Turbulence, I knew it was very special. Still, I was quite surprised and overjoyed when I heard from Jordan."

Basbug, who had studied music before he could ride a bicycle, was even more thrilled when Rudess asked him to write out and ultimately conduct Explorations For Keyboard And Orchestra. "When Jordan called me and asked me to work with him, I thought I was hearing things," Basbug says. "This whole thing has been such an incredible experience for me."

Rudess says that when he was asked by a Venezuelan promoter to compose and perform such a piece, Basburg was his first choice for a collaborator. "I knew he had the musical knowledge and the passion," he says, "but I was really impressed by his work ethic. I spent a good amount of time making files on Logic and sending them to Eren, and we would talk about them extensively via Skype. He was fantastic, and his skills are vast. Put it this way: I don't know all the rules about what a trumpet can play - I'll just pull up a trumpet sound and make it the way I think it should be. But Eren can write it all out and convey it to an orchestra as a conductor. He's really something."

Last fall, Explorations For Keyboard and Orchestra, with Rudess performing the keyboard and synth parts and Basbug conducting the Chacao Youth Symphony Orchestra, had its official premiere in Caracas, Venezuela. "I wrote parts out for, I don't know, 70 or 80 musicians," says Basbug. "It was a lot of hard work, but I would say the whole thing was a tremendous success." In addition to the full orchestra performance, Rudess and Basbug also played sections from the composition together on two keyboards.

Which is what this rather unlikely duo will be doing on Sunday in Tarrytown - only this time they'll play the piece in its entirety, all three movements. "I'll be just us on two keyboards," says Rudess, who will be joined during another portion of the show by Dream Theater vocalist James LaBrie. "James and I will do a couple of songs from the Dream Theater repertoire," says Rudess, "and then I'll do some things on piano, kind of a medley of Yes, Genesis, King Crimson all rolled into one. It's going to be fun."

And if that weren't enough, Rudess has asked the Israeli video Project RnL (Eyal Amir and Ray Livnat) to round out the bill. "They do some incredible music with my MorphWiz program," he says. "We did a video together, and it's so cool. In just a couple of weeks it's gotten over 55,000 hits. Not too bad."

But the focus of the night, undoubtedly, will be on Explorations. "I think it's going to come off rather well," says Rudess. "Eren and I had a rehearsal just a little while ago, and it sounded terrific. I think everybody will dig it."

As for Basbug, the experience of coming to the US and performing side-by-side with one of his idols "is almost too much for me to take in. Working with Jordan the past year, it's made me want to explore and study music more than ever. I love classical music, but I do like progressive rock bands like Dream Theater and Opeth and Porcupine Tree... I think I might want to do something like what those bands do. Of course, what I do will be very different."