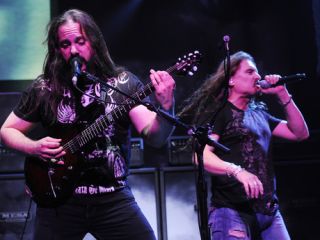 Dream Theater's John Petrucci and James LaBrie on stage in 2009. Who will be the band's new drummer? We'll know soon. © David Atlas/Retna Ltd./Corbis

When drummer Mike Portnoy abruptly left Dream Theater last September, he shocked fans of the progressive rock megagroup across the globe. Since that time, Portnoy has spoken out about his decision, and he's involved himself in a variety of musical projects. But the remaining Dream Theater members have been largely silent.

That could be changing very soon.

A month after Portnoy's departure, the band convened in New York City and jammed with, what are described in a just-issued press release as, "seven of the world's greatest drummers, learning about them musically, personally and professionally, and assessing the fit of each drummer's incredible chops with the band's trademark prog-rock sound."

During the past few months, Dream Theater have been recording a studio album with their new, yet-to-be-announced drummer. While they've managed to keep the sticksman's identity under tight wraps, with summer festival dates approaching (including a headline appearance at the High Voltage fest, 24 July, at Victoria Park in London), the time is drawing near to reveal the man who will take the throne beind DT.

"The departure of our lifelong bandmate and friend was an unexpected and truly heartbreaking blow," guitarist John Petrucci said in the band's statement. "The fact that, as a result of that event, we'd be introduced to seven infinitely capable and uniquely talented drummers was heartening."

Stating that they want to take people inside the process that went into choosing their new member, Dream Theater have asked their fans to visit their Facebook page on 21 April at 11am EST (4pm GMT) to sign up for a mailing list and to receive more details about "an exclusive and intimate look at the auditions, and to find out exactly when and how the momentous announcement about the band's new lineup will be made."

Also on Facebook, fans will be able to find out information about the band's upcoming 2011 World Tour. More news as it happens, folks.