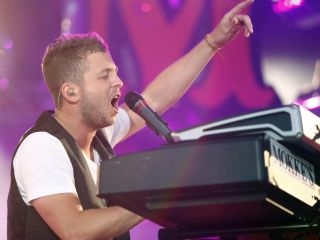 Beyoncé scored a hit earlier this year with Halo, which she co-wrote with Tedder and Evan "Kidd" Bogart. However, prior to this song being released via her I Am… Sasha Fierce album, Tedder had also been working with Kelly Clarkson on a track called Already Gone.

This is set to be released as a single in August, but Clarkson doesn't seem too pleased. She feels that Tedder may have stretched one musical idea over two different songs.

Speaking to Canada's CBC radio, Clarkson said: "Ryan and I met each other at the record label, before he was working with anyone else. We wrote about six songs together, four or five of them made the album. It was all fine and dandy. I'd never heard of a song called Halo ...[Beyoncé's] album came out when my album was already being printed."

When Halo did reach Clarkson's ears, however, she was less than thrilled: "No one's gonna be sittin' at home, thinkin' 'Man, Ryan Tedder gave Beyoncé and Kelly the same track to write to'. No, they're just gonna be sayin' I ripped someone off. I called Ryan and said, 'I don't understand. Why would you do that?'"

Strong words, but Tedder has issued a robust dismissal of Clarkson's claims, stating that: "Already Gone is one of the best songs I've written or produced since Bleeding Love and stands tall on its own merits apart from Halo.

"They are two entirely different songs conceptually, melodically, and lyrically and I would never try to dupe an artist such as Kelly Clarkson or Beyoncé into recording over the same musical track, the idea is both hurtful and absurd.

"I think when people hear Already Gone they will hear what I hear - one of the greatest female vocalists on earth giving her most haunting and heartbreaking performance on a song she helped write.

"I challenge people to listen and form their own opinions."

If you feel like you're up to that challenge, here are the two songs for comparison. Are they a little too similar? We'll leave you to decide…