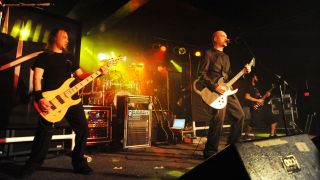 Devin Townsend: Crash landing on earth at a venue near you in 2015

Ziltoid looks like a distant relative of Salacious Crumb, calls Ziltoidia 9 home, and first visited Earth in 2007 in search of the universe's ultimate cup of coffee. Only in Devin Townsend's wormhole mind could this be a reality.

Townsend's extra-terrestrial muse came to life as he was winding down from the mechano-thump of Strapping Young Lad.

In 2007, Townsend released The Hummer, an ambient record to lower his pulse and clear his head, and followed it with Ziltoid The Omniscient. It was as though the Canadian had finally taken off his mask, revealing himself as the grand cosmic magus many of us suspected he was all along, or at least metal's Jim Henson or George Lucas.

Ziltoid... had toilet humour, rhythmically complex riffs underpinning sci-fi pomp, and a caffeinated macguffin. Now it's time to celebrate Ziltoid one last time before Townsend pitches him through the firmament for a retirement in the cosmos.

"It has been a procedure since Strapping Young Lad of trying to get to the root of who I am," explains Townsend.

"What I think I have accomplished over the past seven years is that I have a really good idea of who I am. Z2 is a summary of that. This sound is what I'm going to be doing indefinitely? No!

"When I concluded Strapping... it was because there was no more left to explore within the parameters of that expression - same with Ziltoid, same with the Devin Townsend Project. The Z2 record repeats a lot of what I've done musically... but with a different intention, and that intention is to close it off."

What's next for Townsend is anyone's guess. He moots the notion of an improvisational project. He is currently planning the Royal Albert Hall show, but is soft on the details.

All he knows is that future projects will be "a lot less about layering and hyper-production" and that he might just have found the guitar the Royal Albert Hall deserves.

"I love guitar. As we are talking, I am surrounded by gear. I have got this Framus guitar that showed up yesterday that's the most hilarious thing I have ever experienced. It is a V style, and with the case it weighs a total of 60, six-zero kilograms! The guitar has lasers, LEDs, EverTune; it's a seven-string baritone and has a fucking fog machine in it that is remote controlled."

Devin Townsend tours the UK from 29 March in Bristol, with the Royal Albert Hall show on 13 April.