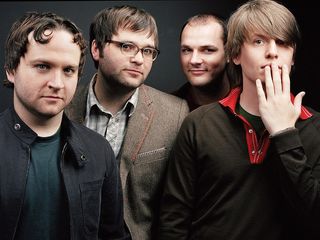 DCFC: Not collaborating with T-Pain any time soon

Washington State's finest indie-rockers Death Cab For Cutie used the Grammy awards to launch a spoof political campaign against the abuse of Auto-Tune in music.

The band - in attendance as nominees in the Best Alternative Music Album category for their excellent Narrow Stairs LP - wore suits and blue pin badges to the awards ceremony to mark their protest.

Death Cab frontman Ben Gibbard: "Auto-tuning is a digital manipulation, a correction of a singer's voice that is affecting literally thousands of singers today and thousands of records that are coming out.

"We just want to raise awareness while we're here and try to bring back the blue note... The note that's not so perfectly in pitch and just gives the recording some soul and some kind of real character. It's how people really sing."