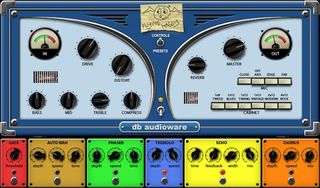 The Flying Haggis doesn't sound like traditional guitar amp, and it's not. A new plug-in from DB Audioware, it promises the tones of a traditional analogue amp via an intuitive yet quirkily attractive interface.

It's not 'modelling' software, per se. "By refining the sound and response by ear, and not following the current trend of analysing and simulating existing hardware", promise db audioware, "(we've) produced an amp with a character all of its own.
Some of the Flying Haggis's features include:
- Ultra low latency for responsive live playing.
- Flexible preset management in standalone player and plug-ins.
- Optimised for live performances.
- Full MIDI control, with easy to use MIDI Learn.
- Plug-ins for PC Windows (VST) and Mac OS X (VST, Audio Units).
- Standalone player for PC and Mac (Universal Binary).
The price is already set in three currencies at $99 / €74 / £49 and demo versions are available. Owners of previous DB Audioware guitar amps (including Quantum FX), can download Flying Haggis for free by logging into their personal support page. Haggis and chips sounds tasty to us, then.