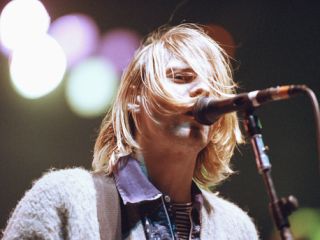 "Nevermind surprised everybody. It certainly surprised me," says Danny Goldberg. Now the head of Gold Village Entertainment, Goldberg, who got his start in the business as Led Zeppelin's publicist, managed Nirvana in the '90s at his former company, Gold Mountain. "I knew it was a great record - we all did - but a life-changing, cultural phenomenon? Nobody expected that."

Released 20 years ago, on 24 September 1991, Nevermind came out of nowhere and hit music fans with a force they hadn't experienced since The Beatles turned the world on its ear in 1964.

And just as the Fab Four opened the floodgates for fellow British bands such as The Rolling Stones, The Animals, The Kinks and The Yardbirds, among others, the success of the Fab Three - singer-songwriter and guitarist Kurt Cobain, bassist Krist Novoselic and drummer Dave Grohl - signaled the start of the grunge revolution, turning audiences onto groups like Soundgarden, Pearl Jam and Alice In Chains.

Packed with raging-guitar, hook-filled classics (Smells Like Teen Spirit, Come As You Are, In Bloom, Lithium), Nevermind put a decisive end to hair metal, toppled Michael Jackson from the number spot on Billboard and made alternative rock the mainstream. Selling over 30 million copies worldwide, it is widely regarded as one of the most significant albums in music history.

Next week, to commemorate the 20th anniversary of Nevermind, Geffen Records will release an expanded reissue of the album in Deluxe and Super Deluxe packages.

On the heels of this release, MusicRadar sat down with Danny Goldberg to talk about Nevermind, along with his thoughts and reflections about working with Kurt Cobain and Nirvana.

Twenty years. Can you believe it?

"No, not really. The passage of 20 years touches everybody when they suddenly stop in their tracks and realize that they're 20 years older. When it comes to thinking about Nevermind and the fact that it came out two decades ago, it is rather hard to believe. Quite simply, it doesn't feel like a 20-year-old record in any way."

When did you start working with Nirvana?

"Probably about a year before Nevermind was released. I had hired a manager named John Silva who knew more about the indie rock scene than I did. Up till then, my roster was people like Bonnie Raitt, the Allman Brothers and Rickie Lee Jones. I wanted to expand into other areas of music.

"Together, John and I signed Sonic Youth, who were very good at picking opening bands. Kim [Gordon] and Thurston [Moore], in particular, had impeccable taste. They chose Nirvana to open for them on a European tour, and I recall John coming back and saying that we should manage Nirvana. Then Thurston called me and told me how great they were. I really trusted Sonic Youth. We met with Nirvana, and they trusted us because they trusted Sonic Youth. [laughs] It was a very quick marriage."

When Nevermind was released, did you have a inkling that it would change the musical landscape?

"I didn't feel that way when it came out. Maybe I was too close to the situation, I don't know. However, I did start to get that sense of change a few weeks after it was released. It happened in phases, but each of those phases became more significant.

"I certainly saw Nirvana's potential to be a popular band when I first saw them live. Funnily enough, among the people who had started working for the band, I was probably the last to see them play, but once I did, I realized how lucky I was - they were great.

"There was a pivotal moment was the record was serviced to radio. WFNX in Boston played the entire album. Typically, this was the kind of thing a station would do if there was a new Rolling Stones album or something from an established superstar. To do it with a new artist or an alternative artist was a major statement. People took notice of that.

"There was another such moment when Guns N' Roses played a show in New York. Before they came on, Smells Like Teen Spirit was played over the PA and the crowd started cheering - and it was very clear they were responding to the song. Again, people noticed that.

"The idea that a mainstream, MTV-type hard rock audience would be into something that, until only a few weeks before, only people who read Maximum RocknRoll and listened to low-wattage college stations were into, was another indicator that something was happening with Nirvana."

And all of these phases happened in a short period of time.

"It all took place in a few weeks after the record was released. Pretty soon we saw a huge sales spike - the record would be sold out in various stores across the country. The difference in awareness of Nirvana from a month before the record came out and a month after was night and day.

"Suddenly, everybody saw that this band could become quite big - way bigger than our idea of success was for them. Everybody had their theories about who the band's audience might be: the band had its theories, so did the label, so did management. In the end, we were all way off!" [laughs]

Nirvana performing in Seattle, 1990, a year before Nevermind was released. © Charles Peterson/Retna Ltd./Corbis

Before Nevermind came out, Kurt told you that all he wanted was to be as big as the Pixies, right?

"As I got to know him better and better in the months and years, I came to realize that he was very ambitious; that he was a scholar of all rock 'n' roll, not just punk rock; and that he aimed big. I loved that he was determined. As a manager, that's what you want to see in your artists. I romanticize all of my clients - I did then, and I do now. If Kurt believed it, then I believed it."

When Nevermind hit number one, much was made of the fact that Nirvana displaced Michael Jackson on the charts. Was this a big deal to the band?

"No, I don't think so. It was just kind of surreal. Toppling Michael Jackson at the time, nobody would have thought such a thing was possible. It was just a giddy, surreal thing."

What went into the decision to lead with Smells Like Teen Spirit?

"It was a no-brainer. Everybody knew it was a great song and would grab people. The feeling was that we needed a more mid-tempo song to cross over to a bigger audience, and Come As You Are was looked at as that song. We felt that Teen Spirit could open a door. We had no idea it would be number one at pop radio and at MTV and everywhere else.

"For the second single, I remember getting together with John Silva and Gary Gersh and the band to talk about what to do next. It was between In Bloom and Come As You Are. Kurt was a little concerned that Come As You Are sounded a bit like a Killing Joke song, but in the end, he was fine with going with it. It was a very non-stressful discussion."

What were your thoughts at the time about Butch Vig producing the album. Did he seem like a good choice?

"I believe Gary Gersh [Nirvana's A&R rep at Geffen] had the idea of using Butch. Butch had produced the Smashing Pumpkins' Gish, which was a very successful record in the indie rock world. That was a very strong credential to have. Kurt liked Butch, Gary liked him, so that was fine with me."

Soon after Nevermind became a smash, Kurt seemed to want to distance himself from it a bit. He called it "one-dimensional" and said that the next album would be rawer sounding. When Nevermind was completed, was he dissatisfied with its sound?

"No. Absolutely not. Kurt completely controlled the record, every detail of it. When the first mixes came in, Gary pointed out to the band that he thought they sounded a bit muddy and maybe this guy Andy Wallace should give it a try, and Kurt was fine with that.

"The whole thing was put to Kurt that he could go with Andy's mixes if he liked them; if he didn't, he could go with Butch Vig's mixes; and if he wanted to try somebody else, he could do that, too. It was in his contract that he had that control. This was his record and he was in charge of its aesthetics.

"I think he was startled with the success, and he realized that if he wanted to keep the credibility with his original audience, he had to express some distaste for the ironic pop appeal of the record. On the other hand, he still wanted to be successful. With the next record, he made sure that some of the songs were remixed so that he had pop singles."

That's interesting, because the picture a lot of people have of Kurt is that he loathed being a huge rock star.

"You know, Kurt didn't become a star by accident, he became a star on purpose. Then he found out he didn't like everything that came with being a star. It was hard for him. He didn't like being recognized on the street or in airports, and stuff like that. But that doesn't mean he didn't want to be successful, because he absolutely did.

"This applied to non-creative aspects of the business, as well. He would call me all the time and ask me about chart positions, how many times their videos were being played on MTV, all kinds of things.

"He could be competitive, too. He even called me one time because he was worried that Pearl Jam were being played more on MTV than Nirvana was. 'Are they mad at us?' he asked me. 'What's going on over there?' [laughs] It's a side of him that a lot of people don't know, but yeah, he was very ambitious."

Sounds like he had a bit of John Lennon in him. Lennon was extremely driven, but he railed against his success.

"There's a difference, though. In The Beatles, you had more than one singer and songwriter. Paul McCartney was every bit John Lennon's creative equal. And Lennon didn't control The Beatles; he was one of The Beatles.

"Nirvana was different. As talented as Dave Grohl was and as successful as he became later, in the context of Nirvana, he and Krist were Kurt's comrades. They played the shows together, they talked about things together, but the creativity of the band was completely controlled by Kurt. It wasn't a democracy."

Had Kurt lived, do you think Nirvana would have continued?

"I think they would have. They would have done side projects, and they would have done things together. I think Kurt clearly had other interests and had so much creativity. I'm not sure that all of his creative impulses would have been satisfied by Nirvana, but he loved the band and was no fool when it came to business. There was something magical about the chemistry of the band. He knew that."