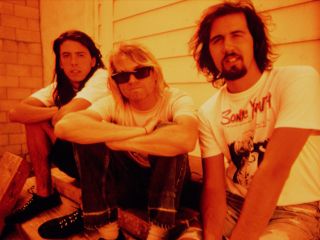 2011 is shaping up to be a very good year for Nirvana fans. Twenty years on from its release, the seismic, all-conquering Nevermind is set for Deluxe and Super Deluxe treatment on 26 September.

The Deluxe edition will contain a remastered version of the original album, plus B-sides and a second disc featuring the Smart Studios demo sessions, BBC sessions and boombox rehearsals.

The Super Deluxe edition contains even more, with the addition of Butch Vig's original album mixes and audio and video footage of the band's Halloween performance at Seattle's Paramount Theatre on 31 October 1991 which fans will recognise from the performances of Breed, Polly, About A Girl and Endless Nameless on Live! Tonight! Sold Out!!

All in all there's not much that hardcore fans won't have heard before either on bootlegs or the With The Lights Out boxset, but it's still a cool package that documents the evolution of the most important rock album of the 1990s.

In addition, 27 July saw the album's artwork - recently voted by MusicRadar users to be the second greatest album cover of all time - pulled by Facebook for apparently contravening its terms of use. The Nirvana Twitter account posted the official removal notice but everything seems to have been resolved as at the time of writing - 28 July - the Nirvana Facebook page was once again displaying the iconic cover image.

Nirvana fans should also look out for 1991: The Year Punk Broke, which finally makes its DVD debut on 6 September and features the band alongside the likes of Sonic Youth and Dinosaur Jr on the European festival circuit just weeks before they would become global superstars.

Here at MusicRadar we have some very special Nirvana features planned for September to celebrate Nevermind's 20th anniversary, so stay tuned. Check out the Deluxe and Super Deluxe edition tracklistings below, but in the meantime, this is why we all still care:

Original album:
Smells Like Teen Spirit
In Bloom
Come As You Are
Breed
Lithium
Polly
Territorial Pissings
Drain You
Lounge Act
Stay Away
On A Plain
Something In The Way

B-sides:
Even In His Youth
Aneurysm
Curmudgeon
D-7 (live at the BBC)
Been A Son (live)
School (live)
Drain You (live)
Sliver (live)
Polly (live)

The Devonshire Mixes:
Smells Like Teen Spirit
In Bloom
Come As You Are
Breed
Lithium
Territorial Pissings
Drain You
Lounge Act
Stay Away
On A Plain
Something In The Way

Live At The Paramount Theatre:
Jesus Doesn't Want Me For A Sunbeam
Aneurysm
Drain You
School
Floyd The Barber
Smells Like Teen Spirit
About A Girl
Polly
Breed
Sliver
Love Buzz
Lithium
Been A Son
Negative Creep
On A Plain
Blew
Rape Me
Territorial Pissings
Endless, Nameless

Music videos:
Smells Like Teen Spirit
Come As You Are
Lithium
In Bloom