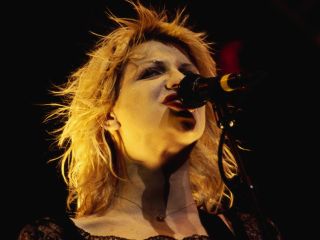 Courtney Love is banned from using the name Hole - which isn't sitting too well with her, considering that she was intending on issuing her upcoming solo record under the name the the band she founded in 1989.

News of the banning comes via former Hole guitarist Eric Erlandson, who told Spin magazine that Love signed a contract with him in 2002 that bars her from using the name Hole for future ventures without his involvement.

"We have a contract," said Erlandson. "She signed a contract with me when we decided to break up the band...so I really don't have comment on it except that I know my part in that band."

"The way I look at it, there is no Hole without me," he continued. "To put it blunt. Just on a business level. I love her a lot and I wish her the best, and I'm open to discussions regarding the real Hole, and if she has a solo album together, I think that's great. I think she should finish it and put it out and do that."

Erlandson's best wishes weren't returned by Courtney Love, who issued a series of scathing - and head-scratchig - rants via her Twitter account first published in the Guardian.

"Hole is MY band, MY name and MY trademark," Love continued in her Tweet. "He also might want to check his TAXES versus my redone taxes on a bogus [social security number], and talk to Perez Hilton's crook CPA accountancy firm (COUGHS then VOMITS) who pay themselves something like $350,000 a week and then dump $38,000 into shell corps.

She concludes: "In 2006 Steve went and corped the name HOLE INC. No one knows where, probably Delaware, but it's not worth getting into I'll tell you that."

We're not saying we can make sense of all of Love's remarks. But the bottom line is this: Don't look for Courtney and Eric to be sharing a stage anytime soon.