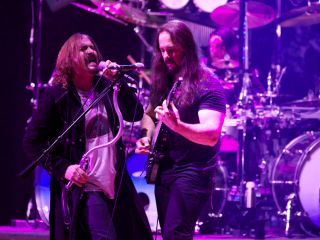 James LaBrie and John Petrucci (with Mike Mangini in back) give as good as they get (Image credit: Brian Patterson/Corbis)

A drum set getting applause? That's got to be a first. But that's just what happened last night (16 October), minutes before Dream Theater took the stage at the Merriam Theater in Philadelphia, Pennsylvania.

Openers Periphery had just walked off and their logo-bearing banner was rolled up, revealing Mike Mangini's awe-inspiring, massive Pearl Reference Pure kit. The crowd roared at the sight, erasing all doubts that the imminent presence of "the new guy" would be met by jeers and boos. (Quite the contrary would be true, in fact.)

After a delightful and extremely well-done animation intro, the much-pedigreed and chops-a-plenty-packing quintet powered into their opening number, Bridges In The Sky, bringing the super-charged, adoring crowd to its feet, where they stayed during the entire 15-song set.

The hero's welcome surely warmed the hearts of the band, who during the past year had braved the very public departure of founding member Mike Portnoy. But with Mangini swinging hard, the group rewarded the faithful with a dizzying musical adventure along with the kind of aggressive, rock-show fervor typical of outfits 20 years their junior.

The energy and overall spirit of merriment built steadily during the next few songs, These Walls, Build Me Up, Break Me Down and Endless Sacrifice, with singer James LaBrie (whose voice was in robust form) literally swaying to guitarist John Petrucci's fleet-fingered, piercing solos and the galvanizing, highly inventive interplay between bassist John Myung and keyboardist Jordan Rudess.

"Ladies and gentlemen…Mike Mangini!" LaBrie yelled, sounding more like a fan than a bandmate, and with that, Dream Theater's man in the hot seat proved why he got the job that some of the world's best drummers coveted.

An infectious, let-me-entertain-you smile on his face, Mangini built theme upon theme in his solo, walking a tightrope between wild improvisation and dedicated structure. His overall approach was that of plate-spinner - and that's not to belittle his artistry. Pulling off the impossible, limbs working independently but towards a musically cohesive whole, requires a caution-to-the-wind soul, and Mangini showed he's full up in that department.

The YTSE Jam was a stupefying, rifftastic gonzo affair, a collective mild-mend. And then it was time for a change-up, a brief acoustic set for The Silent Man and Beneath The Surface, during which Petrucci supplied effective backing vocals and supple, tasteful chordal work. On the latter tune, Rudess played a moody, prog-rock solo that harkened back to the glory days of Wakeman and Emerson.

Outcry, another standout track from the band's new album, A Dramatic Turn Of Events, shook the walls with volcanic force. Complex unison lines and intricate counterpoint runs - the guys crunched right through them. But this was no clinic, it was more like a party-hearty pile-on - pushing, pulling and giving as good as you get and then some.

The waves grew deeper and gnarlier with Forsaken, Through My Words and Fatal Tragedy - epic, swirling resolves and constant mood shifts - but it was during Breaking All Illusions that Dream Theater set the bar for all future shows. A 12-minute classic rock meets prog tour de force, Messrs Myung, Rudess and Mangini handled its many varied turnarounds with supreme aplomb. John Petrucci's bluesy solo summoned ghosts, and by the time he and Myung locked horns the visions were real.

For an encore came a spellbinding Under A Glass Moon. Though it might have been something of a victory lap (LaBrie's voice indicated he had another few hours left in him), it was reason to believe that the next dramatic turn for the band may be a return to their "evening with" shows. Sprinting through a marathon should be no sweat for them.

Next page: an interview with John Petrucci

Has the novelty of having Mike Mangini on board worn off, or was there no novelty at all because he fit right in?

"That's just it - there was no novelty. From the beginning, he fit right in. He's one of us. Playing with him during the summer tour, and now on this tour, which we're already halfway through, it's been amazing. We're all in a very good place musically and mentally, and he's a big part of that.

"We're used to the way he plays, his dynamics and what he brings to us. There's a kind of zen-like feeling we're having on stage. We're very dialed in to one another, and we're comfortable. The show is flowing. We're aware of the cues, the lighting, the sound - everything is syncing up. We feel like a cohesive unit.

"All of that puts you into a relaxed state when performing. We're in control and we're focused. It allows us to communicate with one another and the audience in an easy but spirited way. It's a terrific feeling."

Yes, spirited. The show felt very elastic, even though you guys were obviously concentrating very hard.

"Yeah. That's a great thing to achieve when you're up there. You plan the set and work out all the changes, but you want it to feel fresh. If it comes off that way, that's great. I'm glad."

Of the new songs, have any surprised you at how they're going over?

"Probably Breaking All Illusions. That one did surprise us how it's becoming a fan favorite. In fact, in the beginning, we had a couple of different sets where we'd alternate the songs, and we got a lot of feedback that people loved it - they really wanted it in the show. Now we're playing it every night.

"Hearing that, getting that feedback, is a real testament to our fans and their acceptance of the new album. You know, we've been together for over 25 years, and we have a lot of songs. Knowing that the fans want to hear the new album is an awesome feeling. A lot of times fans don't want to hear new songs; they just want the stuff they know real well. We're pretty fortunate."

Mike Mangini: so good that even his drum set gets applause. © Brian Patterson/Corbis

What about the older songs? How are they feeling with Mike Mangini playing them?

"The older songs feel more like the album versions. That might be because that's how Mike learned them. He hasn't played them with us for years and years. But it's kind of nice going back to them in that way. We're sort of all rediscovering them together.

"One thing I really like is playing the little acoustic set. That's surprised me at how well it's going over. I realize that we're known for our wild musical adventures, but it's nice to take a breath and play some nice songs acoustically. It sets a great mood for everybody. Plus, James really shines during that section. His voice sounds so beautiful."

There was one striking moment before you guys even played: Mike Mangini's drum set got an applause when the opening band's banner was lifted.

[laughs] "That's hysterical! Nice. Well, I guess it's all about anticipation. People are excited. Maybe they've seen some videos and some pictures. They've seen the drum set, and they know that the band is coming."

James mentioned on stage that the crowd seemed to know what songs were next because they read about the show online.

"That's just the way it is these days. When we played our first show of the tour, people didn't know what to expect. But once you play that opening night, it's out there. People have their iPhones and they're texting or whatever. You can't do anything about it. It's just the reality of playing nowadays. But it gets people excited. They want to come see the show, so that's great for us."

Last question: Backstage, we saw your wardrobe cases. My word, how many black T-shirts do you guys own?

"A lot! Well, you know what they say: black makes you look thinner. So there you go." [laughs]