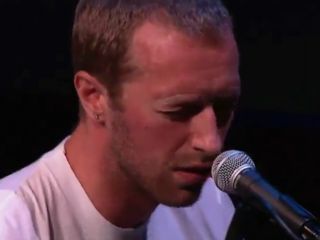 Is Chris Martin sending out a message with the song Wedding Bells?

Coldplay's Chris Martin really, really likes Apple. Doubt it? It's the name he and his wife, Gwyneth Paltrow, bestowed upon their first child. And yesterday, to perform a new song called Wedding Bells for the first time ever in public, he chose to do so at an Apple convention in California.

And it could be the last time Martin plays the song - at least he suggested that much. In his introduction of the long-gone-wrong lament, the singer joked, "This is a new song… I've been working on it - it's called 'Coldplay 2.6'. It has a lot of new features. It features seven different kinds of chords. Even a new one that our closest rivals have no idea about."

Which of course elicited guffaws from Apple CEO Steve Jobs and company. Still, the tone of the song, which Martin performed at a time when tabloids are rife with stories of his imminent split from Paltrow, was deadly serious.

"Those wedding bells are ringing up upon that hill/ and I don't want to swallow such a bitter pill/ you keep on moving, but I stay still/ but I always loved you and I always will," Martin sang in the opening verse. Makes you wonder if he'll stay true to his word and never play the song again.