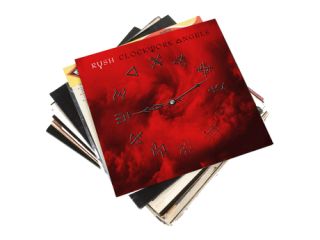 The album - Rush's first since 2007 and their first on Roadrunner Records - will go on sale officially in the UK in July. However, the new record will be available from 11 June as part of an exclusive fanpack put together by our good friends at Classic Rock.

On sale a full three weeks before the regular UK album release date, Classic Rock Presents Rush - Clockwork Angels (fanpack edition) features the new album in full plus a 132 page magazine that forms the 'ultimate sleevenotes' to the new record, with extensive and exclusive interviews with Neil Peart, Geddy Lee and Alex Lifeson.

Inside is everything you need to know about Clockwork Angels: full track-by-track rundown by the band, an interview with producer Nic Raskulinecz, long time cover artist Hugh Syme and more - all with exclusive unseen shots.

Other features include: Gene Simmons on Rush in the '70s, Rush's live rig and set-up, plus the band's full back catalogue reappraised by former producer Terry Brown, Manic Street Preacher and superfan Nicky Wire, Steven Wilson (Porcupine Tree) and more.