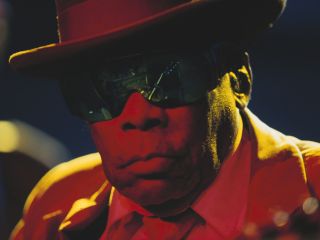 John Lee Hooker is the definitive Mr Blues. His gruff voice, gruffer songwriting style and minimalist guitar work have become familiar to blues lovers and the blues-bereft alike. If you've shopped for beer, jeans and Pepsi, Hooker soundbites have probably influenced what you went home with.

Beyond the TV ads, though, he's responsible for bringing the blues, both traditional and modern, out of the cold and into accepted mainstream music. Heavens, you can even hear Hooker in the mellow, easy-listening suburbia of the BBC's Radio 2.

"Well, my voice has mellowed out a little too," reveals Hooker, in a rare admission of his advancing years. There's no doubt that Hooker is the oldest elder statesman of blues - indeed, of popular music itself. He has several years' start on the likes of Sinatra and his Chicago and Mississippi contemporaries are all gone: "There's just me and BB left now," he reflects.

But where BB King has to some degree courted commercialism and glitz, it has simply followed John Lee. He is revered as an icon of a bygone America, an icon which may, or may not, have really existed, but one which a growing number of ad agencies and music buyers are tapping into.

Hooker's last two albums, The Healer, on which he was aided by Carlos Santana, Bonnie Raitt and Robert Cray, and the follow-up, Chill Out, where Santana made another guest appearance and Hooker's old friend Van Morrison lent a hand, sold massively.

John Lee now lives comfortably on the West Coast, flitting from his house in San Francisco to other homes he has acquired as investments. When you get some money after decades of slog and commercial rip-off, you want to see it, feel it - sit in it.

A stretched limo is parked outside; occasionally John Lee is driven into town. His entourage is mainly women - "They just want to meet John Lee Hooker," he says. His life is one of ease, where he revels in who he is, but still doesn't quite know why: "I've never done anything different, just sung the blues. But now they tell me I'm a genius."

Whatever he is, John Lee is magnanimous. He's the first to admit that his continued success is due, at least in part, to the blues explosion of the sixties, which saw young white musicians - a lot of them middle-class Brits like Eric Clapton - taking 'his' music and making it their own.

"That's who made the blues," insists Hooker, in a gracious display of modesty. "Eric Clapton, John Mayall and all those other people over in England made the blues a big thing. In the States, people didn't want to know, and it wasn't until the British guys made the American people listen that people like myself and Freddie King, Albert and BB King started to get people wanting to hear our music. It was our music originally, but it was those guys in England who made it big and then brought it back to the States.

"I actually came over to England to live, because there was more work and more recognition for what I did in England than there was over here. It's changed now, though, and all kinds of people like blues in America, too. But it's those guys we have to thank."

John Lee Hooker was born in Clarksdale, Mississippi on 22 August 1917. He took up singing the blues professionally in the early thirties and his laid-back, drawling style later influenced sixties artists such as John Mayall, Johnny Winter and Buddy Guy.

Tracks like Boogie Chillen' have become blues classics and dozens of albums have been recorded on legendary labels such as Chess and Charly. In a career spanning over half a century, Hooker can't remember how many records he's made - it could be as many as 250 - but he has particular fondness for The Healer, on which he duetted famously with Carlos Santana on sessions which seemed to elevate both parties.

"Hoo. That was my big record," whoops Hooker; "that was a real big record that put me right back on track again. Carlos Santana was very good on that record. He's not a blues guy at all, he's a Latin guitarist, but what we did together there was real good. What did it was his guitar and my voice. He's got his own voice on the guitar - one note from Carlos and you know it's him - and I guess one note from me and you know it's me, too."

Hooker's latest release on Pointblank/Virgin is Don't Look Back, a combination of old songs and new which marked an overdue collaboration with longtime friend and blues soulmate Van Morrison.

"Van's been my friend for a lot of years," enthuses John Lee, his voice becoming noticeably animated when discussing the enigmatic Irishman. "Van's a real blues man and he has the blues inside him. It doesn't matter whether he's white or Irish; he's a blues man for sure and I love him. He's a great influence on me and we work real good together."

Morrison takes the producer's credit on Don't Look Back and indeed was scheduled to work with Hooker on The Healer, but contractual obligations kept the two apart. "This is a great album though," says John Lee, "and it was good to do some of the old songs again, like Dimples; that's still one of my favourites. We did some of those old tunes because a lot of the young folk who like blues have never had the chance to hear them.

"Blues is really, really big now, but I did Dimples way back, before a lot of these kids were born, so it's a good chance for me to do the songs in a new way - especially with my friend Van producing and singing on the record, too - and for young people to hear them fresh."

On Dimples, John Lee is joined by Los Lobos, who supply a surprisingly authentic and spirited backing, while the bulk of the musical chores are covered by regular cohort Charles Brown on piano and Hammond organ, with Brown's guitarist and bass player, Danny Caron and Ruth Davies, lending their weight.

The album's drummer and keyboard player are Kevin Hayes and Jimmy Pugh from the Robert Cray band, while occasional horns are added by Gregory Davis and Roger Lewis of the Dirty Dozen. Van Morrison also adds vocals to four tracks, including his own composition The Healing Game.

"This was a good album to make," states Hooker; "I enjoyed working alongside Van and you can hear on the record that we got along just great; he pushed me and I pushed him too."

Perhaps surprisingly for some, John Lee has chosen to cover Jimi Hendrix's classic blues Red House on this latest recording. In fact John Lee was recently in conversation with Jimi's father and sister and made a promise that he'd record the track at his next opportunity.

"I've always loved that song; I loved the way Jimi did it. I never did see him play, but I know he was seen as somebody in the rock side of things, but underneath he was a blues man. He played a mean blues guitar. He was under-rated in some ways, but he made it real big."