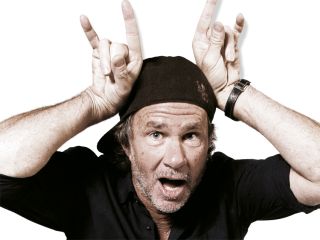 Smith:"Chili Peppers are not splitting"

In recent weeks there has been talk of the Red Hot Chili Peppers' self-declared break from each other as being something of a more permanent split - an end to the band, even. However, drummer Chad Smith has moved to deny such talk and confirm the quartet will work together again.

"We'd been on tour for a year-and-a-half and we said; Let's take a year off," he told Rhythm magazine. "We hadn't taken a year off since John Frusciante rejoined our group almost 10 years ago. We write songs, then we record, then we tour for a year-and-a-half, then we write songs, so we did that three times. Time for a little break. Anthony (Kiedis) was having a baby, John (Frusciante) wants to do his solo record and Flea has his stuff going on. Everybody needed just a little break from being Chili Peppers.

"September's coming up so we're going to get together after the summer and see what we want to do. We're not breaking up, nobody hates anybody or anything like that. We're just taking a nice healthy break to do other things."

Indeed, Smith predicts the Chili Peppers' best work is ahead of them.

"Musically some of our best stuff is yet to come. For some reason we have a special thing, the four of us. We've changed the chemistry of the band a couple of times. When John Frusciante rejoined for the second time, we were like: This is a special chemistry we have, this band of people…

"I never thought the Chili Peppers would be a band for more than three or four years. It started off as this joke, jumping around with socks on our dicks. We're fortunate to keep going and people still want to see us play and enjoy our records. We're fortunate and we appreciate that."

Smith is Guest Editor of the forthcoming edition of Rhythm, on sale 1 August. Inside he picks his favourite tracks, is interviewed and more.

RHCP guitarist John Frusciante is currently working on another solo album and, despite becoming a father in late 2007, Kiedis has recently split from his partner and son's mother.