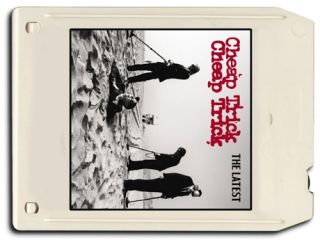 In what might be a last-ditch attempt at reliving the commercial success Cheap Trick enjoyed during the '70s, the power rockers are bringing back another 'colourful' by-product of that decade: the 8-track tape.

The band's Latest album (yes, it's called The Latest) is available on CD, Vinyl and 8-track cartridge. The Sony Walkman, the resurrection of cassette culture and Dirty Projectors can eat their hearts out.

Cheap Trick's manager Dave Frey admitted that finding an 8-track manufacturer wasn't easy: "There was a lot of looking under rocks," he told The Globe. "They're expensive to make, and they don't make very many at a time."

They eventually found a "small plant" in Dallas, Texas capable of pulling off the retro-fit.

You can pre-order all formats of The Latest, issued on Cheap Trick's own label, from here (the 8-track will set you back $30. An accompanying video to the album's cover of Slade's When The Lights Are Out will be available on Betamax soon. Probably.

Update: we've got a podcast interview with Cheap Trick's lead guitarist coming up next week where we'll be talking about, among other things, the band's reasoning behind the 8-track. Watch this space.