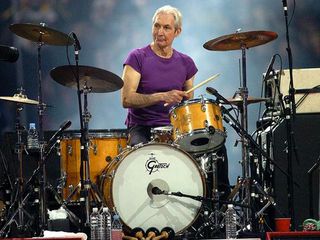 When it comes to the Stones, time is still on Watts's side (Image credit: Tomasso DeRosa/Corbis News Agency/Corbis)

Charlie Watts Quits The Rolling Stones. That was the shocking headline on the Australian music website Undercover.com.

News of which sent chills throughout the music community. Coming on the heels of Noel Gallagher's decesion to split Oasis, the thought that Charlie Watts would leave the Stones just shy of their 50th anniversary seemed almost too much to bear.

And as it turns out, it isn't. MusicRadar contacted the office of The Rolling Stones' spokesperson, Fran Curtis, who issued the following statement:

"Contrary to a fabricated story that ran this morning, Charlie Watts has not left The Rolling Stones.''

According to Undercover.com, which quoted a source within the Stones' circle, "Charlie Watts has quit the band. He will never record or tour with the band again." The source also said that the Stones were looking to Charlie Drayton, Keith Richards's drummer from the Expensive Winos, to take Watts's place.

An associate of Fran Curtis declined to say how the rumor got started, but vehemently denied any truth to the story that the 68-year-old Watts has left The Greatest Rock 'N' Roll Band In The World.