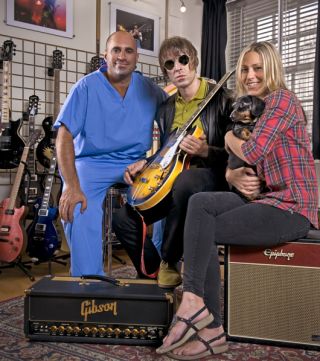 So, we all already know Liam Gallagher the Pretty Green fashion designer, frontman of Beady Eye, outspoken coat wearer and tambourine wielder extraordinaire (Wikipedia also tells us he was once in some band called Oasis). But we can now add renowned puppy lover to that list of accolades.

News reaches us that the former Britpop star and now Beady Eye frontman has been the first of what is set to be a host of celebrities to sign a classic Epiphone Casino guitar which will be auctioned off to support the charity event Pup Aid.

Gallagher added his signature to the axe when he attended the launch of Pup Aid at Gibson's London showroom this Monday. Liam was accompanied by his wife, former All Saint Nicole Appleton, celebrity vet Marc Abraham and Gallagher's pet Dachshund Ruby Tuesday.

Pup Aid, which is set to take place in Brighton on 19th September, is a charity event combining a boutique music festival and fun celebrity-judged dog show (which is precisely what we always thought was missing from the UK's festival circuit).

"As a massive Oasis fan I'm honoured Liam and Nicole are involved and helping me to promote dog welfare," said Marc Abraham, of ITV's This Morning and Sky 1's My Pet Shame. "[Pup Aid] is raising much-needed funds for both rescue and the research into the health and happiness of all dogs."

For more information about the auction of the guitar or Pup Aid 2010, and to book tickets visit The Pet.

Don't say we didn't give you plenty of notice. So if you miss out… don't look bark in anger (sorry).