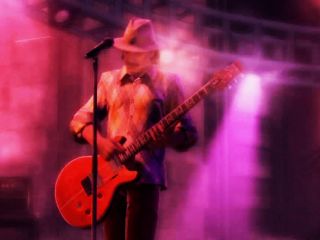 Santana as a Guitar Hero character. But is he 'Supernatural'?

Carlos Santana has been a guitar hero before the term was even coined. But now he's a character in the upcoming Guitar Hero 5 video game, minting his status in a whole new way.

Santana will feature as what Activision calls an unlockable "in-game artist," meaning the guitarist's image will be seen on screen as you play along to the Santana music, which, in this case, is the classic No One To Depend On, from the band's self-titled third album released in 1971.

"We're thrilled to showcase one of the top guitarists of all time in Guitar Hero 5 and offer fans the opportunity to experience Carlos Santana's signature sounds and iconic likeness first-hand," said Tim Riley, Vice President Of Music Affairs for Guitar Hero.

Added Riley: "His accomplished career and breadth of musical style are a great illustration of the variety of rock experiences we have included in the game and we are excited to announce him as the first of five playable in-game artists."

Santana's version of Black Magic Woman was a stand-out in Guitar Hero 3, so it's only fitting that the guitarist himself gets bumped up to "in-game artist" cred for the Guitar Hero 5.

Still, it's a little funny seeing an artist who prides himself on taste and style performing in front of a giant skull. (Idea for next game: a cage match between Santana and Gene Simmons!)