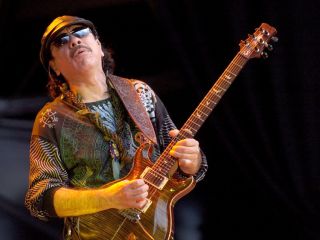 Carlos Santana and AC/DC go together like...Well, we're not sure. But soon, they'll be forever linked, as the veteran guitarist tackles them, along with The Beatles, Led Zeppelin, The Rolling Stones and even Def Leppard on his upcoming, still untitled album of classic rock covers.

According to Billboard, Santana was initially hesitant about such a project. But after an impassioned, 45-minute phone call from Sony Music Chief Creative Office Clive Davis, the guitarist was sold.

The album, due out in September, sees Santana applying his signature sound to Cream's Sunshine Of Your Love (with Rob Thomas on vocals), AC/DC's Back In Black (with Nas rhyming up), Zeppelin's Whole Lotta Love (Chris Cornell belts this one out, appropriately enough), and Def Leppard's Photograph (Chris Daughtry rocks the mic here), among others.

Describing each song as "incredible," Santana admits he does have a favorite: The Beatles' While My Guitar Gently Weeps, which he recorded with India.Arie and cellist Yo Yo Ma. The guitarist says that "I sent the song to George Harrison's widow, Olivia, and I got back an e-mail that says, 'Carlos, I listened to the song and I started crying and jumping with joy at the same time. And I want you to know that George really loved you, because he understood your passion for compassion.' And I was like, 'Bam!' that's like George Harrison himself, through his beautiful wife, validating my existence and what I did with that song."

Wonder if he'll get a similar e-mail from Angus Young.