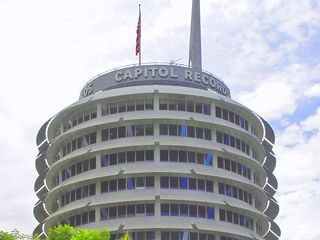 One of America's most famous recording studios could be closed - because of too much noise.

Owners of Los Angeles' historic Capitol Studios are worried that nearby construction will render the studios unusable. LA's City Council are considering a decision for a proposed condominium and office development just a few yards away.

The studios - on the ground floor of the world's first circular office building - are most famous for their subterranean echo chambers, co-designed by electric guitar pioneer Les Paul. Signals from studio microphones travels more than 25 feet underground, to trapezoidal chambers made of 10-inch thick concrete. Speakers bounce the sound to microphones on the other side, carrying a newly reverberating music back up to the mixing console.

The smooth, natural reverb has been in demand for decades, used by everyone from Frank Sinatra in the '50s, the Beastie Boys in the '80s, to Green Day in 2004. The proposed condo's underground garage would be located only 15 feet away from the echo chambers, making them unusable.

"There are very few specially built studios left, and the [echo] chambers are the thing that make it special," said producer Jon Brion (Kanye West, Evan Dando) to the Associated Press.

Engineer Geoff Emerick, who recorded The Beatles' Sgt Pepper's Lonely Hearts Club Band and Revolver albums, agrees. "Those echo chambers at Capitol should not ever be lost. That sound cannot be reproduced."

LA's City Council makes its decision on the proposed development nearby on 8 July.