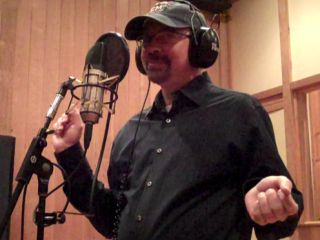 "This is the singing police! You're surrounded! Step away from the microphone and put your hands on your head!"

Auto-Tune is everywhere. From acts like Owl City (who admitted to MusicRadar that he uses the software) and Daft Punk to Kanye West and T-Pain, to say nothing of the Britney Spears-a-like pop singers of this world, that squiggly, robotic-sounding voice is inescapable.

And what's that voice saying? Simple: "OK, so I'm not the greatest singer in the world. Big whoop - I've got a hit, dammit!"

Introduced in 1997 by Antares Audio Technologies, Auto-Tune is an audio processor that uses a phase vocoder to correct pitch in vocal and instrumental performances. Which means, if you're a little bit off, it can disguise inaccuracies and mistakes.

But what about when you're a whole lot off, as in you can't sing at all? MusicRadar put the software to the test. That's right, they sent yours truly, Joe Bosso, a decent guitarist and drummer but - I'll be brutally honest - a freaking horrible singer to Skyline Studios in New York City to see if I have even a sliver of a chance in hell of being the next Auto-Tune pop sensation.

For my audition, I went with a classic (and something simple, or so I believed) - that ol' standby Happy Birthday (with a little nod to Marilyn Monroe).

As you can see in the video above, things didn't go swimmingly. After flubbing a first take (my piano accompanist's fault), we got as good a rendition as I could muster. Next, it was into the control room where the real magic was going to happen.

Skyline house engineer Nick Miller decided that the Tenor setting on Auto-Tune would fit my voice. He selected the key of C (the saddest of all keys, in my case) and pushed a button called Improved Targeting, which makes the frequencies 'harder.' In short, anything that's not in the key of C, the software grabs it and pulls it into the scale...or tries to.

Next page: The remix

Next, Miller hit Tracking and Retune and cranked the Choosy control to the max. As opposed to the setting called Relaxed, Choosy gives you that famous T-Pain sound. "It freaks out your vocals," says Miller. "Not to sound insulting, but if you can't sing that well, or can't sing at all, Choosy is the way to go. It's mechanical sounding, but it works."

Oh, and does it. Check out the video of my singing before and after and decide: Can Auto-Tune turn anyone (well, me in this case) into a singer?

And after you've had a few yuks, we have more fun for you. Here's an MP3 file of my raw, un-Auto-Tuned vocal performance. Have your way with it. Auto-Tune me to to your heart's content. Slap my vocal stylings on your own boomin' musical jam.

And hey, don't hold back. If you come up with something cool (or just plain ridiculous), send it our way or put it up on YouTube. Consider it a gift to the world.