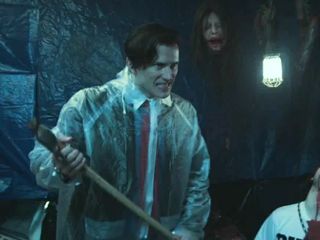 Butch Walker sure has a way with his fans

Butch Walker's star is certainly on the rise. With production credits ranging from Pink to Weezer to Dashboard Confessional, just to name a few, and his own album, I Liked It Better When You Had No Heart, on the way, he's hot and getting hotter.

Still, the pressure must be getting to him.

Check out the video below which documents what happened when a superfan purchased the deluxe $25,000 preorder package of Walker's new album. For such a hefty sum, the fan would be afforded the opportunity to spend the weekend with Walker, collaborate on a song and go on tour with Butch and his band.

However, things didn't turn out exactly as the superfan had hoped.

OK, it's a spoof. The superfan is played by Panic! At The Disco lead singer Brandon Urie and the 'American Psycho' is portrayed by Walker himself. Hey, but they're not too shabby as actors. Do we see film careers in the making?