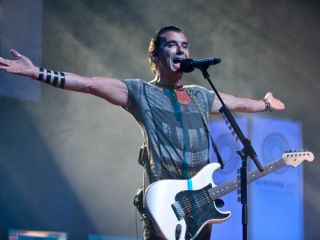 "Welcome back, my friends!" Gavin Rossdale appears to be saying during a Bush concert in Chicago, 18 August 2011. © Robin Alam/Icon SMI/Corbis

Throughout much of the '90s, the sound of Bush ruled the airwaves. Fronted by singer/rhythm guitarist Gavin Rossdale, the alt-rockers scored massive hits such as Everything Zen, Glycerine, Comedown and Machinehead.

It might have seemed like the multi-platinum ride would last forever, but following the 2001 release of the band's fourth album, Golden State, Bush began to fall apart: lead guitarist Nigel Pulsford split (Helmet guitarist Chris Traynor filled in for a tour), and a year later, Rossdale pulled the plug on the group.

On 13 September, the group will issue the Bob Rock-produced The Sea Of Memories. Bursting with gnashing guitars, booming vocals and ironclad hooks, it's nothing short of a triumph for a band that many had written off as dead and buried.

MusicRadar sat down with Gavin Rossdale recently to discuss the new album, his relationship with Chris Traynor, working with Bob Rock and why he and his famous wife, No Doubt's Gwen Stefani, keep their musical careers separate.

Chris Traynor and you have collaborated for 10 years now. What is it about his playing that you like so much?

"I found a great foil in Chris. Nigel was a good foil, too, but with Chris it's different. Personally, we get on very well. We're like brothers, really; we're super-tight. And then, yes, there's his guitar playing, which is very unique, sort of angular - kind of an East Coast feel. With everything we've done, he brings an aesthetic that works beautifully.

"Chris is very dedicated in ways that I'm not. He pays attention to timing and tuning, whereas I'm just like, 'Does it sound OK? Yes. Cool!' [laughs] With Chris, the new songs sound great, the old stuff sounds great - no complaints.

In relaunching Bush, what has surprised you about the new band?

"What I just said, really - how important camaraderie is. Being in a band, keeping it together - it's hard work. This is the thing that so many people don't talk about, the commitment you have to make to be in a band. Whether you're in a successful group or one that isn't, you have to give up so much.

"It's not just about following a dream, it's about dedicating yourself to something. And when you have to travel and disrupt your home life…well, people's lives fall apart all the time. To do this, you have to really want it, and the people you surround yourself with have to know the pitfalls. Luckily, everybody in the band married up. [laughs] But, of course, we don't want to ruin our families."

When Bush came out in the '90s, many critics slagged you off. You were called Nirvana imitators, 'grunge-lite' - and, of course, you did work with Steve Albini. Did the criticism sting?

"Of course. But really, who would want to sympathize with someone in my position? [laughs] I know I wouldn't. If you get even remotely famous, the bad press comes with the territory. My mistake was probably in working too hard to appease the people that weren't into it. What I should have done was just stuck to my guns and played for my fans. You can't just go next door and play for R. Kelly's fans.

"The Pixies' Surfer Rosa is one of the most important records in my life. And when I heard PJ Harvey's Rid Of Me, it just blew my mind. Steve Albini produced both of them, and I thought working with him on Razorblade Suitcase would be fantastic. I thought he could capture how much the band had grown from two, three years of touring.

"Maybe I should've just made the next record with Clive Langer, who produced Sixteen Stone. But I was in a real "I'll-show-those-cunts" kind of mood. I'm not displeased with the album we did with Steve; I just think it could've used…a bit more perspective from the band's point of view. See, Steve prides himself in being a 'recorder,' and maybe we could have worked on arrangements more."

The sound of Bush in 2011 seems to have changed a bit. The guitars are thicker yet more defined.

"Yes, I would say so. I think part of the change has to do with what we use, our guitars and amps. Chris is big into Les Pauls and Marshalls and thousands of pedals. He's got a lot going on. My thing is blending amps: a Diezel, a Divided by 13 and a Vox AC30 - I like that combination a lot. Plus, I love to play Strats, and when I combine my Strat with Chris' Les Paul, there's a nice balance.

"Sound-wise, it was important to make a record that exists on its own merit and isn't tied to the past. I think you could play the new record for people who might never have heard Bush, and they'll get their musical nutrition from it.

"On the other hand, I do hope that older fans will hear it and won't be disappointed. It's us. We've changed, but not radically. The thickness of the guitars, the power of the guitars, that was something that we had to maintain. It's bigger, it's better - I'm happy with it."

There is a radical change on some of the new songs, though. All My Life has a bit of a Black Sabbath sound.

"When I was writing that song - when I was writing all the songs on the new album, really - I lost sight of the fact that I was writing for Bush. I can become very self-aware a lot of the time, and sometimes the best things come out when you just forget everything. I was in the studio messing around, and this riff just came out. It was huge. So I was like, 'OK, let me go with this. Let me write this huge rock riff.' It's so much fun to play live, that song."

The lyrics in the song The Sound Of Winter - are you writing about your own life there?

"Of course. Like they say, if you want a really boring, shallow life, keep changing partners; if you want a really interesting life, stay with one person. There's always going to be autobiographical elements in my material, but the trick is to make it something that people can relate to or draw upon. And, of course, the song has to be good.

"You know, I have a very good memory. A lot of people have done me wrong in my life, and the only revenge I can have is to write about them. So if somebody betrays me, they're doing me a favor because they're giving me material. Whenever I need to get to a place that's dark, or if I need to summon up some instant hate [laughs], I just think of those people, and it's easy."

What was it like working with Bob Rock on the new record?

"It was wonderful. I did a lot of stuff on my own in my studio, so Bob would come down and spend a month with me, and then he'd go off for a while and come back. When we're together, he's very hands-on; he's like the head chef. And his musical knowledge is so extensive. Guitars, keyboards, amps, cables, speakers, gear, microphones, all that bullshit - you can't out-nerd him. He knows it all."

You are, of course, married to someone who's in a pretty big band. Do you and Gwen ever trade notes on each other's music?

"It was different when she did her solo thing, because I felt as though it was my job to help. When it comes to our bands, that's different. It's way cooler to leave it alone. I don't play her anything until I'm done, and I don't want to offer my opinions on her band. It's unnecessary.

"Plus, I like that element of mystery - that's what's great about our love. You know, I wouldn't want to be needy, going to my wife: 'Oh, honey, what do you think about this chorus?' That'd be so sad. It's much better to be like, 'Hey baby - number nine on the chart. Check it out.' Much cooler."