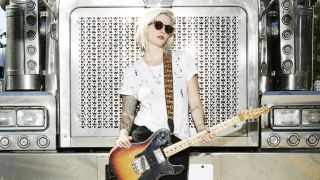 "Motherhood hasn't mellowed me," says Brody Dalle. "I'm more pissed off now than ever." Ten years on from her last interview with Total Guitar, a lot has changed in Dalle's world, but she remains as opinionated and punk-spirited as ever.

In those 10 years, she's married and had two children with Josh Homme, disbanded The Distillers and shelved her Spinnerette project. Now she's back with a new solo record, Diploid Love.

It's an album that represents a sharp left turn from the brash, powerchord-heavy playing of The Distillers: Instead, tracks such as Meet The Foetus and Don't Mess With Me are haunting, lo-fi alt-rock peppered with Dalle's signature vocal hooks. It's a sonic sea change from both The Distillers and Spinnerette.

"I moved away from punk on Spinnerette," she tells TG shortly before taking to the stage for the latest show on her European comeback tour. "I moved back a little bit and then maybe further away again. It's just what comes out; it's not about trying to do anything in particular. It's just what I'm writing and what the songs require."

"I love playing the guitar, it's my favourite thing to do"

Plus it seems that when it comes to guitar, these songs require something a little different to the playing we've heard throughout Brody's back catalogue.

"I'm less afraid to play lead now. I have more ideas for leads. They're still simple - it's not like I'm fucking Van Halen, and nor would I want to be. I like more Pixies-style lead. I love playing the guitar. It's my favourite thing to do. I'm a good rhythm player - I just dig in."

There may have been new tricks picked up in terms of guitar work since Spinnerette's 2009 record, but some things never change - vocally, Diploid Love is as hook-heavy as any of Brody's past material.

"I don't want to sing it if it's not hooky," she spits. "I couldn't just play some drone-y bullshit. There has to be a hook."

Cult production hero/regular Josh Homme-collaborator Alain Johannes mans the desk for the record, and his influence is felt far and wide.

"We just worked on something until we liked it. We'd be twisting knobs and changing shit around until we went, 'Ah, there it is!' There's only so much space before it sounds like a fucking bunch of crap. It can go wrong pretty quickly," adds Dalle.

Brody's Lollar Wide Range Humbucker-loaded Nash T-72 Deluxe (bought for her as a birthday gift by Johannes) was used in heavy rotation alongside her trusty old '73 Sunburst Telecaster. Of the latter, she said:

"That was the guitar I bought with my first royalty cheque, so that is still my baby. It has this great warm sound; the neck is worn down perfectly. It's just made for me, and it's really sexy to look at.

"I used a couple of Al's guitars as well. He has some crazy guitars and instruments. He has this weird six-foot tall wood stringed instrument from China. I was trying to figure out where to put that in a song because it was so insane. I haven't figured that out yet, and I don't think he has, either."

Since finishing the record and walking away from Johannes' treasure trove of instruments, Brody has returned to her quest for musical diversification, and while motherhood has put paid to her being able to work on guitar technique for hours on end, she is interested in expanding her musical palate.

"Unless I can sit in my room like a teenager and just focus on one thing, truly mastering the guitar probably isn't on the cards for me. I still have fun though. I'd like to play the drums and the piano and play more bass. Playing those instruments could make me a better guitar player.

"Guitar is my number-one love; I don't feel normal or right without it. I think that was what was wrong with Spinnerette - I couldn't play some of that stuff and sing at the same time, so I felt naked without my guitar. My guitar makes me feel powerful and secure."

We return to the changes that her life and career have gone through in the last decade. She remains unflinchingly upbeat about the past, present and future.

"If The Distillers hadn't broken up, I wouldn't be here doing what I've just done. All of your experiences make you who you are. I think, ultimately, we all want to find out what that sounds like. I'll just keep doing that. I'm excited to just get to play. I'm boundary-less."