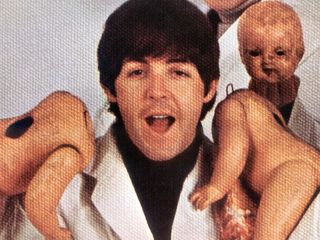 Laugh it up, Paul. Welcome to Karma

Sir Paul McCartney has finally lost his head. Well, someone's lost it for him, anyway. A waxwork version of the former Beatle was listed to sell at auction on Sunday, but the head has been left on a train.

Auctioneer Joby Carter had carefully stored the head in a bag under a seat, but alighted at Maidenhead station (UK) without it. The service terminated at Reading, but the head was nowhere to be seen. The whole waxwork is expected to fetch between £5000 - £10000 so, quite understandably, Mr Carter is offering a £2000 reward for the head's safe return.

If you've seen a mop-topped ball somewhere between Maidenhead and Reading, get in touch with Carters Entertainment auctioneers to claim your reward. If you're of the dishonest persuasion, however, and the idea of a waxwork head signed by the remaining Beatles fills your eyes with dollar signs: you're out of luck. Ringo Starr doesn't do that anymore…