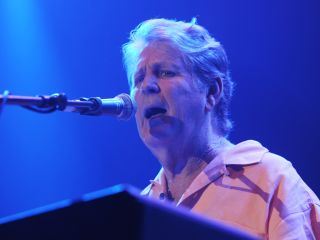 It takes a great singer to do justice to Gershwin. Brian Wilson is such a singer (Image credit: Rune Hellestad/Corbis)

Brian Wilson is not reuniting with his Beach Boys bandmates, as was erroneously reported by some press outlets last month. But the genius behind Pet Sounds has announced his latest project: Brian Wilson Reimagines Gershwin.

Make no mistake, however - it's no ordinary covers album. What will undoubtedly make this record a must-have for music lovers of all stripes is that the estate of George Gershwin enlisted Wilson to complete unfinished music that the late composer had left behind when he died in 1937.

The resulting album, due out 16 August (17 August in the US), features two songs that are now de facto Gershwin-Wilson collaborations: The Like in I Love You and Nothing But Love. Head over to Brian Wilson's website and you can hear The Like in I Love You. (Take it from us, the combination of Wilson's heavenly vocals with the wondrous, sweeping nature of Gershwin's timeless melodic lines is a thing of rare beauty.)

Elsewhere on the album, Wilson has his way with beloved Gershwin standards like Summertime, I've Got Rhythm, They Can't Take That Away From Me, Someone To Watch Over Me - my goodness, they're all classics! And if that weren't all, the record opens and closes Rhapsody In Blue, sung a capella by Wilson. (That alone makes the set worth buying!)

In a statement, Wilson said, "Along with Irving Berlin, Gershwin basically invented the popular song, but he did something more. He had a gift for melody that nobody has ever equaled, yet his music is timeless and always accessible. This is the most spiritual project I've ever worked on."