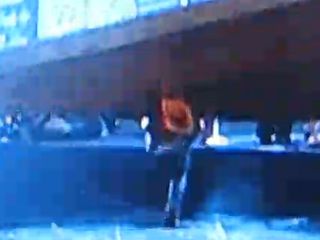 It was Poison's Bret Michaels vs stage scenery at last night's Tony Awards, and the scenery won a decisive victory.

Michaels, star of the MTV reality show Rock Of Love, had just finished performing Nothin' But A Good Time with Poison and cast members of the hair metal musical Rock Of Ages.

Everybody else cleared the stage on time, but Michaels, hanging back a second too long, turned and tried to walk off, right as a descending set piece gave him an unkinny bop on the head. Can you say, "Bam-o!"?

On Broadway, 'Break a leg' is an oft-used expression, a way a saying, 'Have a good show.' Last night on Broadway, the clotheslined singer added 'Break a nose' to the show-biz lexicon. Watch the video below.