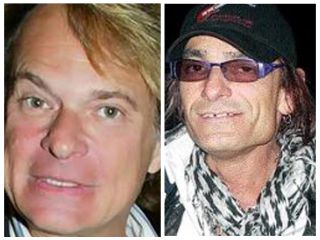 But that's not the case for a certain imposter who, according to Ontario police, is roaming the province and claiming to be the Van Halen frontman. This is the same faux Diamond Dave who was saved by police after peanuts caused a severe and potentially life-threatening allergic reaction.

Last week, the real nut-loving David Lee Roth issued a statement, in which he stressed that he was not saved by Ontario police and he's not allergic to anything, "besides criticism." A police spokesperson is now saying this fake Roth has "scammed a lot of people" in Canada and that he could be charged with obstruction of justice for giving a false name to cops.

But wait, there's more: The fugazy Diamond Dave was seen partying at a nightclub in Hamilton, Ontario, where he reportedly sang a song (now, that takes nuts!) and was partying with "two nurses from the hospital." The man was wearing expensive clothes and "a hospital bracelet." Seems like the phoney Dave is back on the nuts.

Rock star impersonators, while not legion, have their place in music history. Back in the '70s, a long-haired, moustachioed Texas drifter managed to con a string of women at drive-in theatres into believing that he was guitarist James "JY" Young of the band Styx. Reportedly, he got more than free popcorn.

Then there's Walter Louellen Stearns, who aimed low on the do-you-know-who-I-am? scale, posing to investors as members of the bands REO Speedwagon and .38 Special. He also claimed to be a member of Lynyrd Skynyrd - undoubtedly, his inability to play the solo to Freebird was his undoing.

MusicRadar's favorite story of a rock star impersonator dates from 1992. Back then, ex-Fleetwood Mac guitarist Peter Green was a recluse. An Essex, UK farmer called Patrick Harper - nicknamed locally The Egg And Potato Man - began claiming to be Green on the comeback trail. He even duped Queen drummer Roger Taylor, among others, into lending support and studio time.

"I saw him one day," the real Peter Green recalled later. "He looked like a Hell's Angel - a bit taller than me, looking kind of strange. I heard a rumour that he went into EMI and to call his bluff they offered him a quarter of a million pound record deal, and he said, 'No, I better not.'"

They're all nuts, folks, one way or another.