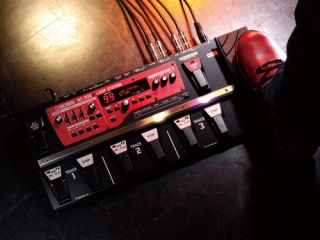 It wasn't long ago that looping was considered to be a rather leftfield concept by most guitarists, but there's no denying that it has moved into the mainstream in recent years.

Replacing the now-discontinued RC-50, the new RC-300 from Boss has the functionality to take looping to the next level in both live and studio environments. Here's the official press release from Roland:

"Boss is pleased to introduce the RC-300 Loop Station, the new flagship model in its industry-leading lineup of real-time phrase loopers. Equipped with multitrack loop phrases, three hours of stereo recording time, built-in effects, enhanced real-time control options, USB, and much more, the RC-300 is a dream machine for the growing legions of instrumentalists and vocalists who incorporate live looping in their musical performances.

"The RC-300 replaces the popular RC-50, improving on its powerful predecessor in nearly every way. Like the RC-50, it's housed in an ultra-durable metal chassis that's built to last, and offers 99 different memory locations, each with three independent stereo or mono loop phrases.

"But, the RC-300 ups the ante big time with three hours of recording and loop storage: more than seven times the amount available in the RC-50. The RC-300 also provides newly enhanced options for controlling loop phrases, including dedicated rec/dub/play and stop footswitches for each phrase, an all start/stop footswitch, and an expression pedal for real-time effects control.

"The RC-300's interface is simple to navigate, with a comprehensive display and many dedicated knobs, buttons, and status indicators. In addition, three faders provide for quick mixing of loop phrases.

"Onboard effects allow users to process their audio sources and loops with cool sounds such as slicer, filter, transpose, and many more. Effects are optimised for looping and can automatically sync to the tempo track. There's even a handy effect for getting a bass sound with a regular guitar, as well as a host of modern vocal effects.

"Users have an array of options for connecting various audio devices via the RC-300's well-stocked rear panel (click to view). Inputs include an XLR microphone jack with phantom power, mono or stereo instrument jacks, and an aux jack for hooking up an external music player or other stereo device.

"All the inputs can be used simultaneously, giving performers the ability to record loops instantly with any connected sound source. Stereo outputs include independent main and sub jacks, and a headphone jack for practice or stage monitoring.

"USB allows for connecting to a computer to import/export WAV loop phrases. MIDI I/O is included as well. Rounding out the rear panel are jacks for connecting optional Boss footswitches (up to four) and/or expression pedals (up to two), providing additional real-time control options for looping power users.

"The RC-300 is expected to ship in November with a street price of £399. For more information, please visit www.RolandConnect.com."