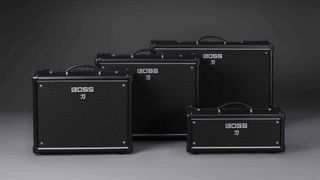 After unveiling the almighty Waza Amp back at NAMM, Boss has followed up with the Katana range of guitar amps, which the company claims will deliver "class-defying tone, touch response, and presence".

The five channels span clean, crunch and lead, while adopting the high-gain Brown channel from the £2k+ Waza Amp and adding an acoustic setting for electro-acoustics.

Effects cover boost, modulation, delay and reverb, and are customisable using Boss's free Tone Studio editor software - although 55 are available, players will need to choose 15 to install into the amp at one time, and only three are usable at once.

Boss has also packed preset control into the amp via Tone Setting buttons, which enable guitarists to switch between two presets, as well as have access to the current panel settings, making for three instantly accessible sounds - optional footswitches can be added to adjust these on the fly.

Most intriguing among the range is the Katana-Head, which not only adds MIDI control, but also offers an integrated monitor speaker for tone preview and practice - that makes it fairly unique among the modelling head set to our minds.

Give its aggressive pricing, the Katana line marks a serious statement of intent from Boss, and one whose functionality seems squarely aimed at taking on Blackstar, Marshall and co in the affordable do-all amp sector.

The amps are available from October, so watch this space for a review very soon…