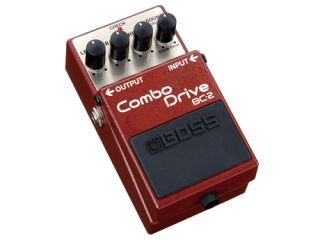 Among a raft of new product announcements from Boss and Roland in September 2011, one of the highlights from a guitar perspective is undoubtedly the Boss BC-2 Combo Drive pedal.

"Boss is proud to announce the BC-2 Combo Drive, the latest addition to the overdrive/distortion category of its legendary lineup of compact pedals. Just as the ST-2 Power Stack brought the sound of a raging stack amp to pedalboards everywhere, the BC-2 now gives players classic British combo amp tone in a convenient stompbox.

"The dual-speaker 'top boost' combo amp drove the sound of the British Invasion in the 1960s, and remained a favourite of many prominent rock guitarists throughout the 1970s. Rediscovered by a new generation in the '80s, the amp's sweet, wide-ranging tones - which fall squarely between vintage American combos and high-gain British stacks - continue to be an essential part of music styles from indie rock to country.

"The easy-to-use BC-2 packs the versatile tube-driven sound and playing feel of the famous Brit combo into a single pedal, from its shimmering clear tones to its raunchy-yet-silky distortion when cranked. A number of well-known guitarists were known to drive the original amps with gain boosters to achieve searing lead tones with tons of sustain, and this sound is captured in the BC-2 as well.

"All three voices, and every colour in-between, can be dialed up with the BC-2's deceptively simple Sound knob. Further sweetening is available with Bass and Treble knobs, while the Level knob controls the effect's overall volume.

"With its wide range of sounds and unique tone signature, the BC-2 is perfect for adding authentic Brit combo essence to any rig, from bedroom practice amps to club combos to monster mega-stacks.

"The BC-2 Combo Drive will be available in September with a street price of £85. For more information, please visit www.RolandConnect.com."