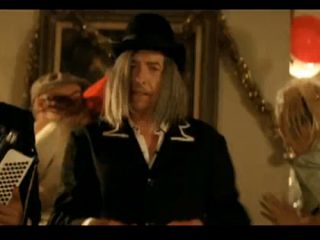 Only a guy named Robert Allen Zimmerman can get you in the Christmas spirit in mid-November, but by George, that's just what Bob Dylan does on his new album Christmas In The Heart.

Dylan even appears in the video to one of the songs, Must Be Santa, a rollicking zydeco number in which he dons a wig and dances merrily all about a house filled with holiday revellers.

At first we thought it was Mickey Rourke still in Wrestler mode, but a closer look (check it out on Dylan's own YouTube channel) reveals that it is indeed Mr Highway 61 Revisted himself.

Dylan, who converted to Christianity in the late '70s has lately claimed that he subscribes to no organized religion. Even so, this song and clip evoke genuine, and slightly irreverent, Yuletide cheer.

It's all part of Dylan's just-released Christmas In The Heart, which sees the iconic singer-songwriter having his unique way with standards such as Do You Hear What I Hear?, Winter Wonderland, The Little Drummer Boy and The Christmas Song (you know - "chestnuts roasting on an open fire").

It's all for a good cause, too: Feeding America will receive Dylan's US royalties, while The United Nations' World Food Programme and Crisis in the UK will receive royalities from overseas sales. "That the problem of hunger is ultimately solvable means we must each do what we can to help feed those who are suffering and support efforts to find long-term solutions," Dylan has said.

And hey, the music sounds great. We haven't put the bells and holly up yet, but this CD just might have us breaking out the decorations sooner than later.