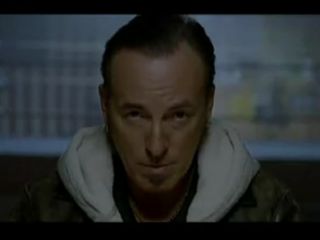 Who needs an Oscar when you can make art?

For reasons only an exhumed and re-animated Albert Einstein could explain, Bruce Springsteen's The Wrestler - the closing credit track to the Mickey Rourke film of the same name - was snubbed by Academy voters in the category of Best Original Song nominations.

While Springsteen did pick up a Golden Globe for the searing number, he's having the last laugh in the the last few days leading up to the Oscars with his video for The Wrestler. This is one clip that hands it back to the Academy six ways to Sunday.

The sweat, the blood and the dreams

If those words don't choke you, brother, check your soul - it's gone missing. There's Bruce standing center ring, with loving, lingering shots of the ropes and the canvas - you'd think this was directed by Scorsese or Eastwood...yeah, it's that real. You can practicaly smell the sweet, taste the blood and see the dreams vanish before your eyes.

Halfway into the video, Springsteen's in a red tank top, an old ski cap atop his head. He almost looks like the Bruce of 30 years ago, the same guy who prowled the boardwalk and sat in his car all night thinking of answers to questions no one yet asked. But he's not that wild and innocent anymore. The years have caught up to him. He's stricken. And what's worse, he can't figure out where all the time went.

While the film clips of Rourke and Marisa Tomei are terrific, you don't really need them. Not that the two performances aren't profoundly moving, because they are, achingly so (if you haven't seen the movie, dash to the cineplex immediately after reading this), but this is one of those rare videos where the singer and the song say it all.

The people behind such decisions at the Academy Awards have truncated the Best Song category to a brief medley during this Sunday's ceremony, the belief being that viewers tune out during the song performances, so keeping things short and sweet will help ratings. (Here's a bright idea: Nominate decent songs and let the performers sing them the way they want - just a thought.)

So egregious was this decision that Peter Gabriel, nominated for the song Down To Earth from Wall-E, said 'thanks, but no thanks' to being a part of the medley. Wise move, Peter.

All I can say is, four minutes of Bruce Springsteen, strumming an acoustic guitar and singing The Wrestler would've equaled no bathroom breaks anywhere. Viewers would have sat in front of their TVs, rapt, filled with wonder, shaken to the core. Art has that effect sometimes.

Maybe next year the Oscars will get it right. Then again...