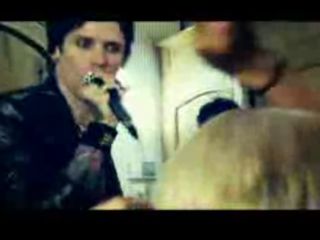 Too Drunk To...Come Up With A New Title

Last week, Buckcherry, a 16th-generation hard rock band from Los Angeles, released a "dirty viral video" for its new opus, Too Drunk...(For those who might be scratching your heads at the term "dirty viral video, "it's another way of saying, "We want you to see this now but we want it to appear as a leak. Wink-wink. Tee-hee-hee.)

The video itself is no great shakes; in fact, you've seen it before in many different incarnations: inside the burnished environs of a Burbank mansion, a band (Buckcherry) performs at a "wild" house party, full of adorning, nubile porn-star wannabes and happening Entourage types. All the girls are digging on the singer (in this case, it's a raging ego-fest by the name of Josh Todd), but he's super-cool, you know? Been there, done that. He'd much rather groove on his tunes and hang with his boys. Uh-huh.

As the song is called Too Drunk...I naturally assumed it was a cover of The Dead Kenneys's hardcore classic, Too Drunk To Fuck. This got me excited for a millisecond - finally, Buckcherry are playing a decent song, I thought. But when I clicked on the "dirty viral video," I was dismayed to realize that Buckcherry's Too Drunk...is yet another Buckcherry original composition (about being, you guessed it, too drunk to...), the kind of Motley Crue-lite ditty they're famous for. As usual, it sucked hard.

But then something else occured to me: By naming their song - or half-naming it - after a much-revered classic, Buckcherry, perhaps wise to their 16th-generation status, are cagily attempting to co-opt some old-school hard core cred. After all, you can fool a lot of the people a lot of the time, and here Buckcherry are no doubt going for the brass ring in the game of SameTitle-Different Song Bait-and-Switch.

Let's take a quick look at some other examples:

And the list goes on. Sometimes the original kills, and other times the bait-and-switch version manages to pull ahead. But rarely is the ploy as cynical and transparent as in the case of Buckcherry.

Obviously, Josh Todd and company have gotten themselves a fair share of media attention with their song and video (singing "fuck" in a tune never hurts). But if they're the true badasses they pretend to be, let's see them do something truly ballsy. In concert, after the by-the-numbers Sunset-Strip swagger of Too Drunk...how about busting out a cover of The Dead Kennedys's hyperspeed song-for-all-ages? Let the fists in the air decide. I know which version I'm going with.