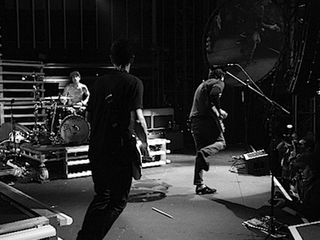 Last night, Blink-182 took to the stage for an impromptu gig at a private event to unveil the new T-Mobile Sidekick mobile device at the Paramount Pictures lot in Hollywood.

It was their first live performance since 2004 and first appearance together since The Grammy Awards in February when they announced their intention to reunite.

"The whole thing was a secret," bassist Mark Hoppus wrote in his blog.

"[Drummer] Travis [Barker] and DJ-AM were already scheduled to perform, and as a surprise ending, Blink-182 came out at the very end and played a few songs.

"During the night, Weezer performed and played the hits, along with a few covers," Hoppus continued. "TRVS/DJ-AM dominated (as they always do), and then we played. To be honest, it was one of the best nights of my life. Thanks to everyone who was there. Thanks to T-Mobile. and most of all, thanks to Travis and Tom. You are my brothers, and it feels amazing to share the stage with you once again.

After a performance set for The Late Show With Jay Leno on 21 May, Blink-182 will embark on a full-blown reunion tour beginning 25 July at The Joint in Las Vegas.

The trek is scheduled to conclude on 2 October at The Borgata Events Center in Atlantic City, New Jersey. Fall Out Boy will open for Blink for two-thirds of the shows, while Weezer pick up the remaining dates.

And in really big, recession-crushing news, Blink-182 are offering fans seats for the super-low price of $20. Want to get in on the action? Visit Blink-182's official website to find out more.